Sun Devil Nation shows up for the Navajo Nation

Sun Devil Nation shows up for the Navajo Nation 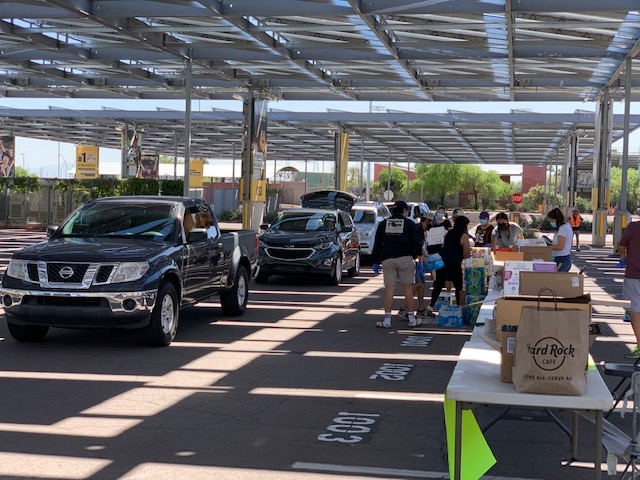 Volunteers unload contributions from cars during the First Peoples’ COVID-19 Resource Drive on May 7.
Photo by Darryl Sam

With less than three weeks to organize and gather sponsor support, a trio of Arizona State University alumni loaded a 21-foot moving truck on May 7 and delivered emergency supplies for the people of the Navajo Nation beleaguered by the COVID-19 pandemic.

When ASU alumnus Darryl Sam, a member of the Navajo Nation, and his wife, Katherine, saw how the pandemic was ravaging the people who live on Navajo tribal lands, they knew they had to help.

“We were sitting on our couch at home watching reports that per capita, the Navajo Nation was the third-largest COVID-19 epicenter in the country. We decided we had to do something,” said Sam, who has many relatives living there. “This is my family.”

The Sams’ family project started out of their garage, using social media, texting and phone calls to friends and co-workers to spread the word. Sam, the owner of Sam Construction and an owner’s representative with minority-owned Dextera LLC, also began to reach out to his industry connections.

One of the first tribes to be affected by COVID-19 was the Confederated Tribes of the Umatilla Indian Reservation in Oregon, which is the tribal community of the Wenaha Group’s President Rob Quaempts.

“By mid-March, everything in Washington was crazy as we watched the pandemic play out,” said McCormick. “When COVID-19 hit the Navajo Nation, people around the country contacted me to ask why it was hitting the tribal nations so hard, especially Navajo. As I explained the systemic issues that create a perfect storm, like multigenerational families living in close quarters, people were shocked and wanted to help.”

Wenaha Group tasked McCormick with taking action to see what, as one small business, they could do.

“I immediately reached out to Darryl and Katherine, and it was like a miracle unfolding with everyone and everything fitting into place,” said McCormick.

Together, the alumni created the First Peoples’ COVID-19 Resource Drive.

“We were very intentional about naming the fundraiser ‘First Peoples’ as we recognized that not only the Navajo Nation was being hit hard by this pandemic, so were other tribes,” explained McCormick. “It was our commitment to be able to help any Southwestern tribe that needed additional support.”

McCormick, who is on the board of directors for the Ira A. Fulton Schools of Engineering’s Construction in Indian Country Program, enlisted Program Director Marcus Denetdale for support. Denetdale is also a Sun Devil alum.

“ASU was all in,” said Denetdale, who — with ASU Foundation Engineering Business Relations Coordinator Anna Wales — rapidly navigated the approval and permit process to host a different kind of tailgate event in the Tempe campus’ stadium parking lot.

The first result of the collaborative effort was three drive-through locations for drop-offs on Thursday, May 7, the largest of which was in Sun Devil Stadium Lot 59. The other two locations were Metrocenter Mall in Phoenix and the Native American Fathers & Families Association in Mesa.

In conjunction with orchestrating the drive-throughs and securing the necessary equipment, social distancing supplies and volunteers for the event, McCormick also coordinated the effort with the Navajo Housing Authority.

For the collected resources to get directly into the homes of those most in need, McCormick knew it would require someone who interfaces regularly with elders and had direct connection to the tribe.

“NHA had been working on a needs assessment plan for seniors for 10 years,” said McCormick. “Within the last few months, they were able to release a 311 App for elders. The timing was perfect.”

The app enables seniors to notify NHA of urgent needs — ranging from water and food to items like toilet paper and disinfectants.

“The NHA will deliver the supplies directly to the elders so they don’t have to leave their homes,” McCormick explained.

The NHA also cleared out a warehouse in Fort Defiance to store the supplies gathered during the First People’s Covid-19 Resource Drive.

NABEDC, a federally funded agency that serves all tribal individuals and enterprises, and the Arizona Hispanic Chamber of Commerce also jumped in, reaching out to their networks to promote the event, find volunteers and provide boxes and packaging materials.

Dose Moving and Storage donated a large moving van and the services of two drivers to transport the collected supplies to the Navajo Nation, and M3 Commercial Moving and Logistics provided boxes and staffing and helped set up the website.

According to Darryl Sam, dozens of small contractors also helped provide packaging materials and volunteers, as well as funding through the group’s GoFundMe page.

Additional drive-throughs are planned in the near future, according to Denetdale, with the donations going to other affected tribal nations, including the Hopi and San Carlos Apache people, as well as to a Pueblo in New Mexico.

Requested donations are listed on the First Peoples’ website.

“It was so gratifying to be there on Thursday morning as the parade of Sun Devils came through the donation line,” said Denetdale. “Everyone was flashing their ‘forks up’ hand signs, and many were wearing ASU gear.

“Many who actually live closer to other drop-off locations made the trek to the stadium,” said Denetdale. “Not only did they bring critical supplies, they made on-site donations. Children gathered their change or proudly donated their allowance.

“The Sun Devil Nation showed up for the Navajo Nation.”