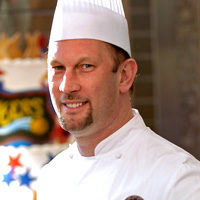 Robert Bennett joined Classic Cake in December 2005 as Executive Chef. In this role, Robert is the creative driving force behind the company’s product offerings and introduces unique, customized breads and desserts to the commercial market. Robert’s oversight also involves the daily operations of the bakery and is responsible for ensuring the company’s high-quality product and service standards.

For over 30 years, Robert Bennett has shared his passion for cooking through his work as a creative chef, teacher and owner. Robert started his career as Executive Pastry Instructor at the New England Culinary Institute (NECI), his alma mater. He quickly catapulted into the worldwide media in January 1985 for being appointed the Honored Pastry Chef for President Reagan’s second Inauguration. He prepared a cake for 44,000 people with a small team of students from N.E.C.I. After which, he took on the position of Executive Pastry Chef/Consultant at the Jumby Bay Resort, Antigua, West Indies. In 1987, Robert was hired as one of four Pastry Chefs at Le Bec-Fin in Philadelphia, Pennsylvania where he quickly worked his way up to Le Bec-Fin’s Head Pastry Chef. In 2001, Robert stepped out on his own and opened Miel Patisserie, a high end, boutique style pastry shop in Cherry Hill, New Jersey and Center City, Philadelphia, Pennsylvania.

Over the years, Robert Bennett competed in numerous competitions worldwide and in 1989, he represented the United States in the premier World Cup Pastry Championship in Lyon, France. Since retiring from competition, Robert has served as a judge for the United States Pastry Competition in New York. An active member of the culinary community, Robert Bennett was one of the original members appointed to the Board of Directors of the North American Pastry Chef’s Association. He is also co-founder of the Philadelphia Pastry Society and was honored by NECI with their “Distinguished Graduate Award.” Chef Bennett is also one of the founding chefs of Chef Aid, which has raised millions of dollars in its 13 years existence. In 2003 He was named U.S. Ambassador for the Barry-Callebut Chocolate Company and was the U.S. Judge at the 2005 World Chocolate Master Championships in Paris, France.

Most recently Chef Bennett has appeared on QVC here in the U.S. 11 times selling Classic Cake’s pastries and traveled to Seoul, S. Korea for several appearances on the CJO Shopping Network selling Classic’s own Philadelphia cheesecakes.

Locally, Robert donates his time and dessert specialties to more than 30 charities each year.

Originally from Lynchburg, Virginia, Robert now resides in South Jersey with his family and “Bailey” the Beagle.