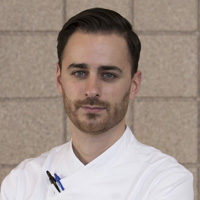 Richard Grab is an accomplished chef with a qualified, diverse background. He was formally trained at the Culinary Institute of America, Hyde Park NY and after graduation he worked his way through various restaurants in Philadelphia, San Francisco and Los Angeles before joining Aramark. Additionally, he is working towards his MBA at Johnson & Wales, RI.

Rich has been with Aramark Sports and Entertainment for 8 years in various positions and is currently the District Executive Chef for the Philadelphia, Baltimore & Washington DC Districts. He his directly responsible for developing Aramark’s culinary talent, focusing on best practices, identifying and improving areas of opportunity for multiple outlets and developing the culinary brand within the region.

Rich has been an integral part of executing multiple NHL, NBA, MLB, NFL Playoff Games, NCAA tournaments, MIA Festivals on the Benjamin Franklin Parkway, and many others including direct oversight of Food and Beverage for the 2016 Democratic National Convention.

Rich is a member of the American Culinary Federation and has completed Level III of the Culinary Institute of America’s ProChef Certification. He is also an active member, and cyclist, of ChefsCycle, a branch of the No Kid Hungry organization which raises money to help stop childhood hunger through donations and education.