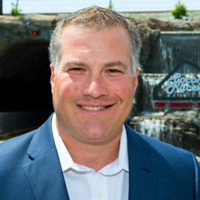 Igdalsky worked and observed every aspect of the operation at Pocono Raceway since he was thirteen years old. He started off in the maintenance department and worked in the facilities sewer plant before making the rounds to nearly every other department within the organization. Over the course of the years his duties included maintenance, hospitality, PR, sales and marketing.

Nick attended Elon University from 1995-1999 where he graduated alongside Pocono Raceway’s current President and close personal confidant, Ben May.

Nick has also been overseeing operations at the family’s other track, South Boston Speedway since 2004. He helped return South Boston to one of the nation’s premier short tracks and over the past few years has taken the lead in designing and implementing South Boston’s million-dollar renovation, which was completed in 2017. SoBo, as it is affectionately known to locals, has consistently ranked among the top NASCAR’s short track in attendance and car counts over its historic 60-years run.

Nick’s experience as a driver in NASCAR Whelen All American Series, SCCA Pro Racing, ARCA Racing Series and IMSA has given him the ability to see the motorsports business from multiple perspectives. He has taken the lead at Pocono in facility design changes and safety improvements. Nick personally designed and championed the upgrades of Pocono’s expansive road course complex. Pocono now houses 22 course designs ranging from .5 – 3.5 miles in length. The new design increased Pocono’s rental capacity 1/3 and there has been a waiting list on dates since project was completed in 2013.

In addition, Nick has also been the Director of the families Mattioli Foundation since 2010. Nick and his wife, Brandy are proud parents of daughters Payton and Kennedy.