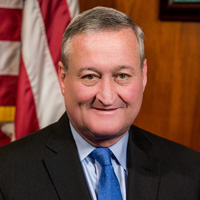 Since taking office in January 2016, Mayor Jim Kenney has implemented a progressive agenda that supports working families and creates more opportunities for our city’s children. He worked closely with City Council to pass a tax on sweetened beverages — to fund bold anti-poverty initiatives, including the expansion of free, quality pre-K; the creation of Community Schools; and the historic investment of hundreds of millions of dollars in parks, recreation centers, playgrounds, and libraries. Building on his early commitment to education, Mayor Kenney successfully initiated the return of the School District to local control, and for the first time in nearly two decades, the District is led by a locally appointed Board of Education.

The Kenney Administration has taken a hard stance — and made national headlines — in defending its values as a Welcoming City. Philadelphia has also made significant strides in public safety and criminal justice reform. The City safely safely reduced its prison population by over a third as part of the MacArthur Safety and Justice Challenge, and the number of pedestrian stops have been cut nearly cut in half. At the same time, the city is experiencing the lowest overall crime rates in nearly 40 years.

Now near the end of his first term, Mayor Kenney continues fighting to increase equity in every neighborhood to ensure Philly is a city that works for all.