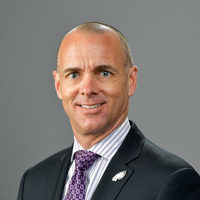 Don Smolenski, now in his 21st season with the organization, was named to his current role of team president in 2012. As president, Smolenski directs the club’s business and strategic efforts, including sales, marketing, communications, and operations. He has played a key role in significant projects from the construction of Lincoln Financial Field to the club’s internationally recognized environmental and philanthropic programs.

Smolenski plays an important role in the team’s environmental initiatives. Because of their Go Green program, the Eagles have emerged as a leader in environmental stewardship in the sports industry. Those efforts include conservation efforts, recycling programs, and use of renewable energy including wind and solar. Under his leadership, Lincoln Financial Field has achieved LEED Gold status, and the organization became the first professional sports team to receive ISO 20121 certification. ISO 20121 certification is an international standard designed to help organizations integrate sustainability into management practices and processes.

During his time as the team’s president, Smolenski and the Eagles saw their first Super Bowl victory in franchise history after defeating the New England Patriots, 41-33, in Super Bowl LII.

An outdoor enthusiast, Smolenski enjoys an active lifestyle and has completed the Detroit, Pittsburgh, and Boston Marathons. He earned his Bachelor of Arts degree in biology from Amherst College and holds a Master of Science degree in accounting. Don and his wife, Karen, have two sons, Jake and Shane.