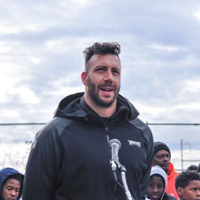 Connor Barwin is an 11-year NFL veteran who has played for the Philadelphia Eagles, Los Angeles Rams, New York Giants and Houston Texans. He selected in the 2nd round of the 2009 NFL Draft and played in the 2014 Pro Bowl.

Connor’s international philanthropic efforts began in 2011 when he traveled to Nigeria on a humanitarian mission to bring medical supplies, textbooks, and American footballs to Nigerian youth.

While partnering with NRG Energy, Connor visited Haiti on multiple occasions to install solar panels on orphanages, schools, and hospitals.

In 2018, Connor climbed Mount Kilimanjaro to raise awareness about water scarcity.
While living in South Philadelphia and biking to practice during his time with the Eagles, Connor found a need for playgrounds and began the first steps in revitalizing local parks. Connor founded Make The World Better, Inc. to foster community engagement and input through all phases of its revitalization projects.

Connor holds a Bachelor of Arts in History from the University of Cincinnati. He and his wife Laura reside in Philadelphia with their son, West.