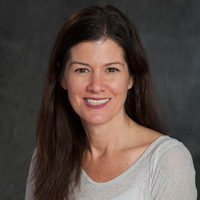 Carolyn DiGiuseppe is responsible for the day to day maintenance of Citizens Bank Park, home of the Philadelphia Phillies. Included in this scope are cleaning, electrical, HVAC, mechanical systems, contracted services, life safety systems, green initiatives and oversite and the management of 23 full-time staff, including union building trades and over 200 seasonal custodial workers.

Carolyn is in her 19th year with Comcast-Spectacor/Spectra. In 2003, she was transferred from Comcast-Spectacor at the Wells Fargo Center to Citizens Bank Park as an Operations Assistant holding several operations roles until becoming General Manager of the facility in 2014. Carolyn has managed the operations of two MLB World Series, the 2012 NHL Winter Classic, many world class concerts and 14 Philadelphia Phillies baseball seasons. Carolyn is a member of the Stadium Managers Association.

She received a BA in Political Science with a concentration in Public Administration from Bloomsburg University.