By Subaru of America, PR Newswire 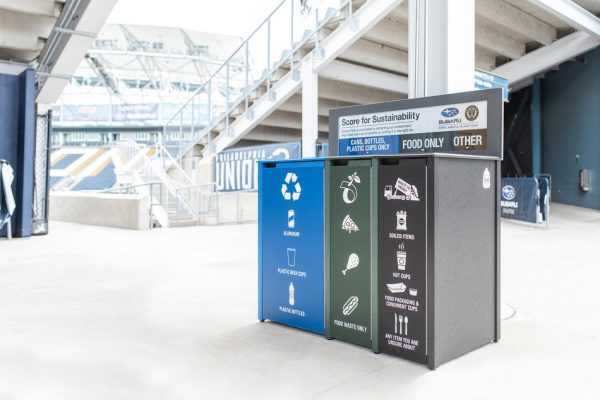 Subaru of America and the Philadelphia Union are committed to protecting our environment by reducing, reusing, and recycling stadium waste. These new, modern front of house three-stream waste containers will help patrons properly dispose of their trash from events at Subaru Park.Subaru of America and Philadelphia Union to Make Subaru Park the First-Ever Zero Landfill Stadium in MLS

CHESTER, Pa., April 22, 2021 /PRNewswire/ — Subaru of America, Inc., in partnership with the Philadelphia Union, today announced that the automaker will bring its established zero landfill knowledge to Subaru Park, home of the Union, making it the first zero landfill stadium in MLS.

While sports stadiums across the country generate massive amounts of trash that go into landfills, through the partnership with Subaru and the Union, Subaru Park aims to become the first MLS Zero Landfill stadium where no trash is sent to a landfill. This initiative ladders up to the core commitment of Subaru and Philadelphia Union to use their partnership to beautify and enhance the greater Philadelphia community through pillars of the Subaru Love Promise.

“At Subaru, we’ve spent years perfecting our Zero Landfill philosophy and helping organizations reduce their environmental footprint. We’ve learned a lot, and we’re thrilled to bring our knowledge to Subaru Park and the greater Philadelphia area,” said Alan Bethke, Senior Vice President, Marketing, Subaru of America, Inc. “With the goal of becoming the first Zero Landfill stadium in MLS, we hope our work with the Philadelphia Union will set the standard for environmental best practices at professional sports stadiums nationwide.”

“The partnership between the Union and Subaru of America was founded on the vision and desire to create a better future for our fans and surrounding community,” said Tim McDermott, Philadelphia Union President. “In the year since our partnership was announced, we’ve made great strides in reaching our ambitions through initiatives that support pet adoption and helping food insecure populations. As a club known for innovation and a community-first mindset, our mission to achieve Zero Landfill status is a milestone in our relationship with Subaru and the history of our organization.”

To put this new process into perspective, Subaru Park recycled more than 40,000 pounds or 20.41 tons of cardboard alone in 2019. With the new zero landfill process in place, Subaru Park will divert an estimated 357,480 pounds of waste from local landfills in an average year, an amount equivalent to:

To achieve this goal, Subaru Park will deploy 111 MAX-R Containers throughout various locations in Subaru Park. These new, modern front-of-house three-stream waste containers will help patrons properly dispose of their waste from any event at Subaru Park. To ensure that the containers are being used properly, Subaru will provide ambassadors to help educate fans with waste disposal and share Subaru Zero Landfill project best practices. Once the waste is collected in the MAX-R containers, the Union will be assisted in the waste removal process with the help of Spectra, Recycle Track Systems, Inc. (RTS), and Covanta Environmental Solutions.

Spectra has been instrumental in helping set up Subaru Park to be successful, putting new containers in place, educating their staff, and ensuring that all the material that can be recycled is separated and sent to be processed. The small amount of waste that can’t be recycled, such as restroom paper towels, utensils, and other items, will be hauled by Recycle Track systems and sent to Covanta Environmental Solutions where the material will be used to generate steam that will turn the turbines to produce electricity for the Philadelphia area.

Subaru and the Union are committed to supporting the greater Philadelphia community with charitable programs, including the Subaru Park Zero Landfill initiative announced today, which is an extension of the Subaru Love Promise. The pairing’s other endeavors include the Dogs of Ben, an initiative aimed at helping shelter dogs find homes in the Philadelphia area, and the Garden for Good, which is intended to provide fresh fruits and vegetables for donation to food banks in Chester during harvesting seasons.