By The Financial Express 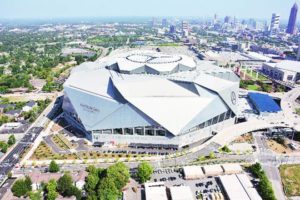 The Mercedes-Benz Stadium in Atlanta, Georgia. It is one of the few football stadiums in the world with retractable roofs.

The Mercedes-Benz Stadium in Atlanta, Georgia, is one of the few football stadiums in the world with retractable roofs. The final phase of the construction of its roof started this past week. The stadium, located in the home of the Atlanta Falcons of the National Football League (NFL), and the Atlanta United FC of the Major League Soccer (MLS), holds the record of the world’s largest halo board.

The unique roof, once completed, will give officials the option to open and close the roof in as quickly as 12 minutes. During this final phase, construction activities will require the roof to be open in a locked position for 10 days to complete elements of the automation process.

The nine-month-old, $1.6-billion stadium has a 20-foot-high gray concrete box underneath an overpass that can hold up to 680,000 gallons of rainwater, collected mostly from the roof of the enormous stadium. The cistern is one of the environmental centerpieces of the building. It is used to irrigate the vegetation around the building, and by storing much of it, flooding will be reduced in the nearby neighborhood. In other words, the 120-foot-long cistern saves money and helps the surrounding area.

The United States Green Building Council, which grades sustainable design and energy efficiency, has bestowed the stadium with the leadership in energy and environmental design (LEED) platinum certification — the first stadium to win it. The agency gives points to builders based on features like efficient lighting, air-conditioning and water fixtures. Builders also earn points for locating their structures near public transportation, and for using locally-sourced and recycled materials.

The stadium secured 88 of a potential 110 points, more than enough to receive the top LEED ranking. It’s no surprise that sports arenas and stadiums have a far smaller carbon footprint than many factories, shopping malls, or office buildings. Even though they host thousands of people for big events, most days, they are used for short durations. And in recent years, these centres have become showcases for green design.

Though critics may argue that leagues are wrapping themselves in eco-friendly banners to help market their sports, team owners have learned that environmentally-friendly arenas are cheaper to operate.