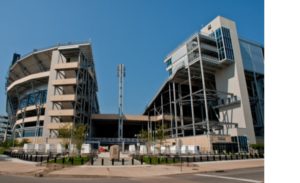 Professional sports franchises that face challenges when it comes to making their venues more sustainable are getting some help from researchers at Penn State’s College of Agricultural Sciences. A large part of the challenge in reducing a venue’s environmental impact is convincing fans to act in environmentally responsible ways, and that can be as simple as changing signage, messaging and containers, according to professor Judd Michael (via Penn State News).

A few years ago, Michael began work on a project to reduce the amount of waste sent to landfill after Nittany Lion football games at Beaver Stadium and has been successful in diverting 100% of waste from landfill in a portion of the stadium. With what he has learned from this project, Michael is helping other sports venues to become more sustainable, most recently working with the Pocono International Raceway to reach zero waste and other goals on its long-term sustainability plan. “Some people said NASCAR fans wouldn’t buy into recycling, but our surveys proved that fans not only cared but wanted the raceway to be ‘greener,’” Michael says. The Pocono Raceway recently released its first comprehensive sustainability report – written by Michael’s research team – that highlights the track’s progress in solar energy production, waste diversion and water management.

In conjunction with the release of its sustainability report, Pocono Raceway announced that it had increased the amount of special waste receptacles to separate waste from recyclables and compostable materials in select areas of the raceway. The containers will allow fans to properly dispose of items in the venue’s quest for 75% diversion at the raceway. The venue also held a “Monster Energy NASCAR Free Friday” on June 9, giving free admission to fans who brought an empty Monster Energy drink can for recycling.

In April, the Milwaukee Bucks’ new Wisconsin Entertainment & Sports Center announced that it is being built with an eye to reducing the arena’s footprint, ensuring energy efficiency, and furthering sustainability. The Bucks contracted with Johnson Controls to install smart building solutions that will be managed on a unified, intelligent infrastructure including HVAC, building automation, security, lighting, fire protection and information technology. The Wisconsin Entertainment and Sports Center is a $524 million project, according to Sports Techie.