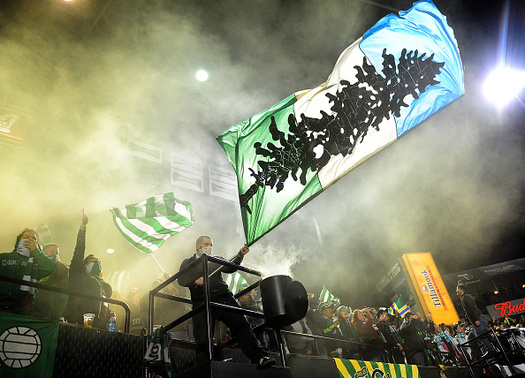 The Portland Timbers are a member of the Green Sports Alliance, which is helping teams, stadiums and fans go green. (Steve Dykes/Getty Images)

Sports reach millions of viewers each year and attract thousands of fans to every game, which means teams and athletes have a lot of influence.

The Green Sports Alliance recognizes that the footprint for stadiums and arenas is big. So it’s focusing on sustainable ways to provide energy, water and food, and also decrease waste.

This movement started six years ago with the Portland Trail Blazers and now includes nearly 400 teams and venues around the world.

The Portland Timbers, Oregon State Beavers and the University of Oregon Ducks are members of the Alliance. Environmental groups such as the National Resources Defense Council, Bonneville Environmental Foundation and others helped found the alliance.

Zeulner says sports bring together fans of all different stripes and is almost unrivaled in its ability to do so. He says that provides the sports world with an opportunity, even obligation, to promote a sustainable future.

“When you start to unify people under a singular platform and then start to ask them to be a part of that through means, whether it’s environmental or social, you start to move the needle and you get people to actually take legitimate action, join each other and make progress toward your goals,” he points out.

Zeulner stresses the stakes for the environment are high, so people must act now to save it.

“Everyone that’s involved in the sports industry is leading, and we are taking this moment in time to express that and ask for others to join us, and we encourage everyone to get involved,” he states.

The Alliance will be in Sacramento at the end of June for its annual summit.