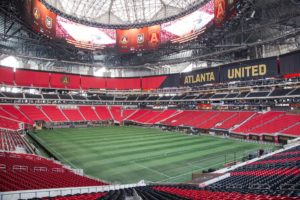 Mercedes-Benz Stadium in Atlanta is the first to win Leadership in Energy and Environmental Design Platinum certification for energy efficiency and sustainable design.
Credit: Kevin D. Liles for The New York Times

ATLANTA — On a walking tour of the nine-month-old, $1.6 billion Mercedes-Benz Stadium here last month, Scott Jenkins, the general manager for the building, stopped in front of a 20-foot-high gray concrete box underneath an overpass. There was little to suggest what was inside. No signs, markings or equipment.

Mr. Jenkins, an evangelist for all things green, was animated. The otherwise generic structure, he said, holds up to 680,000 gallons of rainwater collected mostly from the roof of the enormous stadium standing just a few feet away. The runoff is used to irrigate the vegetation around the building, and by storing much of it, flooding will be reduced in the low-lying West End neighborhood nearby. In other words, the 120-foot-long cistern saves money and helps the surrounding area.

“It’s a community play as much as an environmental play, to do our part around issues in the neighborhood,” Mr. Jenkins said. “If you looked at the return on investment for the water, it will take a long time to pay off. But some of this is good for business and some is good for the community.”