Sports Leaders Come Together To Drive Impact Off the Field

Sports Leaders Come Together To Drive Impact Off the Field

Sports have a unique ability to bring people together, and a growing number of the world’s largest sports franchises are leveraging their influence to make an impact off the field. The Green Sports Alliance catalyzes many of these efforts around sports and sustainability. Its membership includes hundreds of teams, leagues, venues and other industry stakeholders from around the world, who share best practices around improving operational efficiency and engaging fans.

“There’s this massive power in sport that is unparalleled compared to other industries,” said Erik Distler, director of partnerships for the Green Sports Alliance. “We have an opportunity—frankly, I think it’s a responsibility—to harness and leverage that power to advance broader environmental and social issues that are bigger than the game.”

Pushing for sustainability in sports

In December 2018, sports leaders came together with the United Nations to launch the Sports for Climate Action Framework—which challenges industry stakeholders leverage sports as a “unifying tool to drive climate awareness” among the public.

The Green Sports Alliance launched its Playing for the Next Generation campaign in support of the Framework, calling on its members to join and to do their part to combat climate change. “We’ve worked hard to figure out how to latch onto the Framework and help propel it in North America,” Distler told us. Several North American members of the Alliance have already signed on, including the New York Yankees baseball franchise, the National Basketball Association (NBA), and sports and entertainment company AEG—which owns the Los Angeles Kings hockey franchise, among other teams and venues.

Playing for the Next Generation also served as the theme for the Alliance’s annual Green Sports Summit, held last month at Lincoln Financial Field, the home of the Philadelphia Eagles football franchise. As the Summit’s host team, the Eagles offer an example of what’s possible when sports takes sustainability seriously.

What began with an office recycling program back in 2003 has grown into a company-wide effort to reduce environmental impact and increase fan awareness of sustainability issues.

Lincoln Financial Field—known to locals as The Linc—is one of the most environmentally sustainable stadiums used in sport. It’s home to the largest solar power plant of any stadium in the world, constructed in partnership with NRG Energy, which supplies enough power for all of the Eagles’ annual home games and 40 percent of the stadium’s overall energy needs. The Linc also diverts nearly 100 percent of its waste from landfills through recycling, composting and waste-to-energy systems.

Beyond operational improvements, the Eagles are increasingly looking to engage their fans around sustainability. Still, while sports teams command a unique authority with their fans, franchise leadership feels it’s important to be strategic around sustainability messaging to avoid turning people off, said Norman Vossschulte, director of guest experience for the Eagles.

“As a sports team, you put on a show,” Vossschulte told us at the Summit. “Fans come to the stadium to be entertained. They don’t come to necessarily learn about sustainability, so we have to be careful how we message. We believe in connecting with our fans, but we try to do that in fun and organic ways.”

Case in point: In partnership with plastics manufacturer Braskem, the Eagles created a closed-loop recycling system to collect plastic bottle caps and turn them into durable goods for use in the stadium. To drive fan engagement around the initiative, the team and Braskem constructed an eight-foot-tall replica of the Vince Lombardi Trophy, commemorating the Eagles’ Super Bowl LII win, made entirely from bottle caps.

It’s become a favorite spot for picture-taking in the HeadHouse Plaza fan zone, and it’s surrounded by messaging about plastics recycling. Braskem also made a dozen bicycles out of bottle caps, which its executives rode in the Eagles’ annual bike race to raise money for autism research.

“With us, it’s really an organic journey,” Vossschulte said. “We are constantly asking the question, no matter what meeting we sit in or what venture we’re launching: Can sustainability be a part of this? That helps us to constantly evolve.” 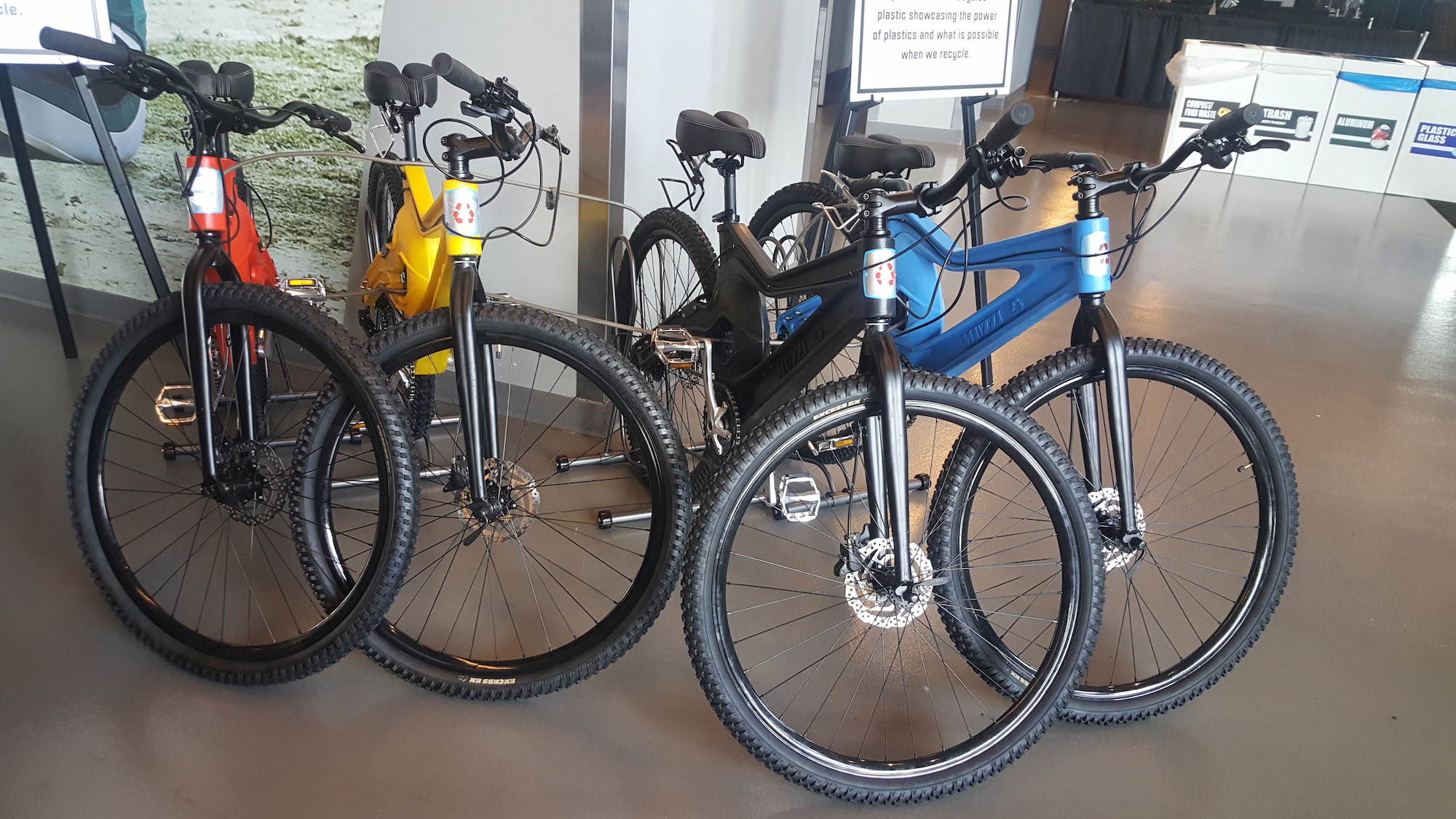 Image: These bicycles made from recycled bottle caps rode in an Eagles’ bike race fundraiser to support autism research.

Driving collaboration for a sustainable future in sports

The Eagles were one of many franchises, leagues and venues to share their sustainability journeys at the Green Sports Summit. While sports are known for fierce competition, the power of teamwork is also very much a part of the game—and the Green Sports Alliance leans on this unifying sentiment to drive knowledge-sharing across the industry.

“Sports bring up something in your heart about competition, but also about collaboration,” said Roger McClendon, executive director of the Alliance. “When you’re on the same team, wearing the same uniform and fighting for the same goal, there’s nothing you won’t do to support the team. That’s where Green Sports has the power. It’s not just the NBA, it’s not just the U.S. Tennis Association, it’s not just NASCAR. It’s all of us together.”

Along with rallying support for the Sports for Climate Action Framework, the Alliance serves as a learning platform to help members reduce energy, waste, and water usage and make their procurements more sustainable. But for McClendon, who took the helm of the Alliance in February after nine years as Yum Brands’ first chief sustainability officer, this is only the beginning. He often refers to operational changes as Sustainability 1.0—they’re commendable, but they’re essentially table stakes for sports companies seeking to be good corporate citizens.

The deeper, fan engagement piece—which McClendon dubs Sustainability 2.0—is a logical next step. “You start to think about the fans who come and engage and you realize, ‘This is bigger than just what’s inside my stadium,’” McClendon explained. But his 3.0 vision ultimately extends even further, as the Alliance calls on industry players to make strategic investments that have a lasting impact in their communities.

“That’s where you get significant change, but it takes a long time to see the impact,” McClendon told us. “What’s pushing us in that area is kind of like the chase to get to the moon—if we have that level of focus, we can make it happen. [Sports] has the resources and the power to influence for good.”

This drive for continual improvement and collaboration is central to the Alliance’s mission—and it helps members push forward into what is often uncharted territory, said Vossschulte of the Eagles. “Sustainability is not our native language,” he told us. “We’re really good at speaking in the language of sports, but sustainability is something we have to constantly learn, and that means we have to share what we’re doing with each other and think about what’s next. That’s where we need the [Alliance] to help us forge those relationships with partners in the industry to find new solutions, new endeavors and new destinations on this journey.”

The 2020 Green Sports Alliance Summit will be held in Minneapolis at the LEED Gold Certified U.S. Bank Stadium, home of the Minnesota Vikings football team. It will mark the Summit’s 10th anniversary and represent the push toward the 3.0 vision and beyond. You can learn more about the event here.