Sporting Kansas City has joined The Victory Project and Children’s Mercy Kansas City to launch “A Force for Good,” a community campaign that will coincide with the club’s landmark 25-year anniversary in Major League Soccer.

For the 2021 MLS season, Sporting’s primary and secondary kits will feature The Victory Project prominently displayed on the jersey front with Children’s Mercy adorning the left sleeve and Compass Minerals on the right sleeve. This marks the first time in MLS history that a charitable foundation will appear on the front of a team’s full-season jerseys. As part of the campaign, a portion of all Sporting Kansas City kit sales in 2021 will be donated to The Victory Project.

“Sporting Kansas City is incredibly proud to showcase The Victory Project and Children’s Mercy through this special campaign,” said Sporting Kansas City President and CEO Jake Reid. “By uniting with these organizations, we are perfectly positioned to give back to the communities that have given us so much. From the jerseys we wear on the field to the philanthropic programs we lead off the field, Sporting is dedicated to being a force for good across the region.” 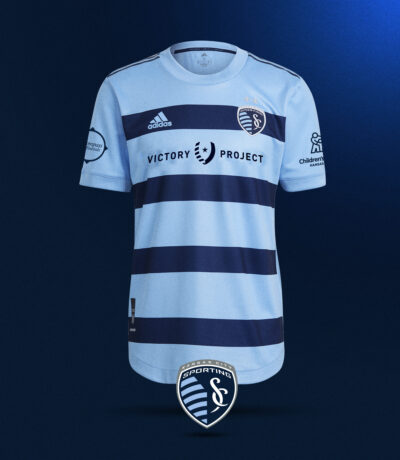 “Every child deserves the opportunity to live in a world of well-being, and Sporting Kansas City has been a strong supporter of our Patient Family Support Services. It’s this commitment to give back that will continue to have a positive impact on our community,” said Paul Kempinski, MS, FACHE, President and Chief Executive Officer, Children’s Mercy Kansas City. “We’re honored to be recognized on the jersey alongside The Victory Project that highlights our collaborative efforts to help area children – especially those battling cancer – get the support and resources they need to achieve the well-being they deserve.”

To kick off “A Force for Good,” Sporting unveiled the club’s new 2021 primary kit today when Children’s Mercy patients and staff donned the jersey at the state-of-the-art Children’s Mercy Research Institute in Kansas City, Missouri.

Sporting’s new primary jersey, which features a return of the iconic Sporting Blue and Dark Indigo horizontal stripes, will be available to purchase beginning at 10 a.m. CT on Tuesday, March 9, at the Budweiser Brew House inside Children’s Mercy Park and at MLSstore.com. Supporters can also place jersey orders at SportingStyle.com for curbside pickup near the Budweiser Brew House at the corner of Village West Parkway and France Family Drive.

The Victory Project is a philanthropic foundation established by Sporting in 2013 that helps children through all of life’s challenges by uniting players, staff, fans and community partners across the Kansas City and Midwest regions. Through numerous events and initiatives, The Victory Project is dedicated to enhancing and enriching the lives of children battling cancer, providing special experiences and opportunities to children with disabilities and making the sport of soccer more accessible to children with limited financial resources.

Over the course of 2021, “A Force for Good” will see The Victory Project grow its commitment to helping children and join forces with local partners to meet crucial community needs. The campaign will focus on four key platforms:

For more information about The Victory Project or to make a donation, visit VictoryKC.org.

Building on the heritage and culture of a popular look for Sporting, the club’s new 2021 primary kit is an evolution of the hooped 2014-15 and 2016-17 secondary jerseys. The horizontal stripes of Sporting Blue and Dark Indigo celebrate the timeless tradition of hooped soccer jerseys worldwide. Among the kit’s finer details, the signature adidas Three Stripes run along the shoulders, the back neck features argyle SKC initials, and the interior back neckline showcases the “Two States, One City, One Club” mantra. Sporting Blue shorts and socks round out the new primary uniform.

Sporting’s secondary jersey, featuring a Dark Indigo base and Sporting Blue Swiss dots, will return for the 2021 season, this time with The Victory Project on the front and Children’s Mercy on the left sleeve. For the second straight year, Compass Minerals will feature a patch on the right sleeve of Sporting’s primary and secondary jerseys as part of a long-term partnership as the club’s official plant nutrition and salt provider.