SoFi Stadium and Hollywood Park, a near 300-acre sports and entertainment destination, worked with Studio MLA, a landscape architecture and urban design studio, to create a civic and environmentally conscious landscape across three key areas: water capture and reuse, the utilization of 100 percent Southern California-native plant species, and the continued development of public parks for year-round use.

The focus on sustainable landscape solutions and water conservation led to the creation of Lake Park, which functions as an open recreational space for the community and a novel water recycling system. Inspired by the original water feature that was part of the former Hollywood Park racetrack, Lake Park consists of an upper and lower lake separated by cascading waterfalls. At approximately 6 acres and 16 million gallons of water, the lake is surrounded by an additional 6 acres of parkland.

The site’s 5,000-plus trees and many species of plants are all native to Southern California and represent the five main ecologies that make up the Mediterranean biome that Southern California inhabits. By purposefully selecting plants and trees that are native to the region, it promotes the regeneration of habitats that were previously missing in the area and encourages the return of native wildlife. 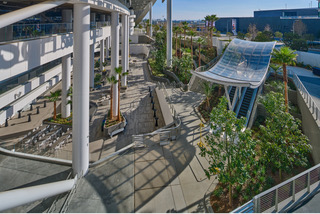 The landscape design at SoFi Stadium celebrates Southern California’s characteristic lifestyle, and the stadium is the NFL’s first indoor-outdoor venue. Arranged in various microclimate zones around the stadium park, a rich, biodiverse habitat serves regional hawks, warblers, monarch butterflies, honeybees, and hundreds of other species along with shrubs, groundcovers, wetlands, and meadows. 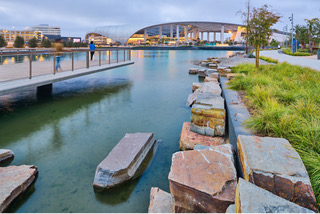 The lake in Lake Park functions as a water recycling system by collecting 70 to 80 percent of stormwater runoff from around the site — nearly 5 million gallons each year — filtering it through natural wetlands and mechanical systems, and then using it to irrigate the surrounding parkland. It is the first lake of this kind to successfully mix stormwater with reclaimed water, and the first-of-its-kind filtration system to clean water before reuse. 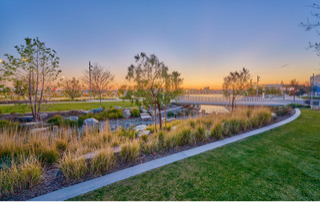 The landscape at SoFi Stadium and Hollywood Park features 16.65 acres of total planting area. In addition to the water recycling and runoff capture benefits, the plantings sequester about 240,000 pounds of CO2 per year. 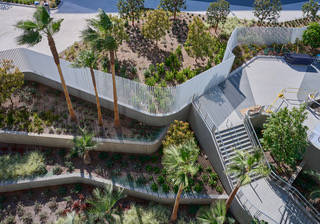 SoFi Stadium is part of the larger, 300-acre Hollywood Park development, which features a network of parks and open spaces that are accessible to the public year-round for recreation, relaxation, and entertainment. The development includes 6-plus miles of new multi-use trails, bikeways and sidewalks.

Among the many notable features of the landscape design at the stadium are three terraced gardens or “canyons” that sit on the north, west, and east side of the building. Each of the canyon’s landscapes draws from a particular biogeographic zone in California. For example, where sunlight is more present in the north canyon, a desert garden is featured. In the shadier east canyon, vegetation mirrors upper and lower montane areas of the state. In the west-facing canyon, the plants reflect low-elevation chaparral and riparian ecosystems.
View Original Article
Shay Strawser2022-10-17T19:30:07-06:00