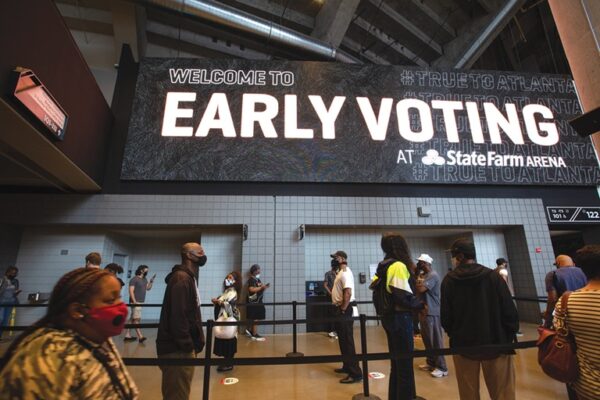 The push mirrored a similar approach pressed for by longtime NFL executive Scott Pioli, who since 2017 had been working with RISE to Vote and secretaries of state across the country on a similar plan.

By the fall, the efforts to turn sports venues into polling places, volunteer training centers and registration sites across the country had an undeniable impact on what became record turnout across the country. In all there were 38 such facilities hosting early voting and 33 open for voting and ballot dropoff on Election Day.

Approximate number of confirmed votes at arenas and stadiums, according to USA Today.

Both arenas and stadiums across sports were drafted into use. Voters cast ballots in 18 NBA arenas, including five that also host NHL teams; 13 NFL stadiums; 13 college-specific arenas; six MLB ballparks; five NHL-only venues; an MLS stadium and a NASCAR speedway.

Atlanta’s State Farm Arena moved about 40,000 voters through its 300 machines in Georgia’s 19 days of early voting with little waiting and no reports of incident, even though it quadrupled the turnout at the state’s next busiest site. That was four times as many as voted at any other Fulton County site.

In Dallas and some other markets, conveniently accessible downtown arenas were the most trafficked voting sites in their counties. Iconic venues such as Fenway Park and Lambeau Field were popular, drawing voters who wanted to visit a favorite place while casting a ballot. Fenway drew 25% of those who voted in 10 Boston locations on the two days it was open.

Teams across sports put together volunteer programs to provide poll workers. The Hawks took the extraordinary step of fully staffing their arena polling site and covering all expenses, which totaled in the mid-six figures. More than a dozen Hawks employees were trained as poll managers. Hawks IT workers were trained to provide tech support.

For Pioli, who lives in Atlanta, there was more at stake than just helping during a health crisis.

“This was about racial equality and voter suppression,” he said. “This was the perfect idea. Now we realize how good it can be.”