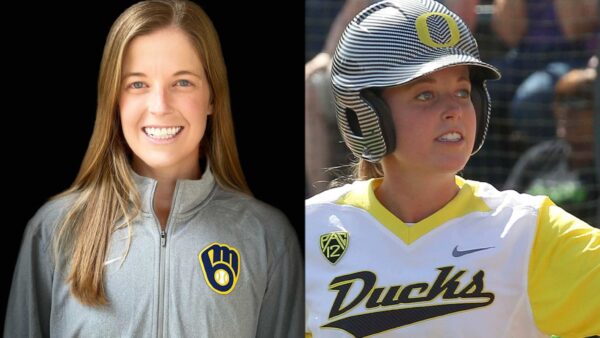 The Brewers have named Goodrum, 27, to be their Minor League hitting coordinator, a promotion believed to make her the first woman ever to hold that job for a big league organization. She will oversee the Brewers’ hitting program throughout the organization, manage the hitting coaches at the team’s affiliates and, when the coronavirus pandemic fades, travel around the system to assist in player instruction.

Since 2017, Goodrum had worked in the Brewers’ Sports Science and Integrative Sports Performance lab at the team’s training facility in Phoenix. Although the Brewers didn’t announce her promotion until Thursday while they completed their player development staff, Goodrum actually has been in her new role since October.

“The most eye-opening thing for me is that especially with the players who are coming up now, they don’t care if you’re a man or a woman,” Goodrum said. “If you can provide them guidance that is going to help them accomplish their dream of making it to the big leagues, they don’t care.

“For me, it’s always been about showing first and foremost that I care about them. I’m going to continue to do that as I go into the role of being a little more on the front face with our players. Showing them, ‘I want to help you guys in your career, and I’ll be able to provide that information.’ Our hitting coaches are phenomenal, as well. I don’t think the players mind what your gender is. It’s about the information.” 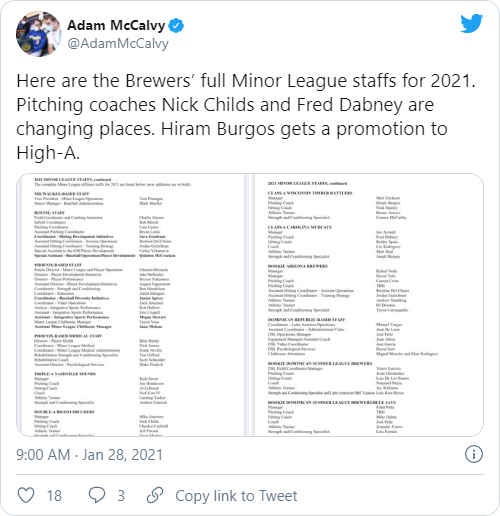 Women also have been breaking barriers in baseball’s front offices, most notably with Kim Ng’s ascension to general manager in Miami. Two weeks later, the Orioles hired Eve Rosenbaum to the newly created role of director of baseball development to coordinate between Baltimore’s scouting, player development and analytics departments. 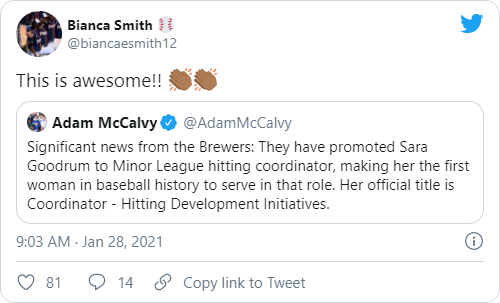 “We’ve seen it work for almost four years with Sara in our organization working very closely with our players and our coaches,” Brewers president of baseball operations David Stearns said. “I think we’ve seen that because of her talent and her skill set, she is trusted and respected. We would anticipate that continuing in this new position.”

Said Brewers farm director Tom Flanagan: “I think [gender] is really a non-issue, where we’re at today in the game. Specifically, with [Goodrum], there is a familiarity with our hitters. She has been around the batting cage for the last couple of years, so there are relationships there, there’s knowledge of what we’re trying to do and what she’s trying to do. I think it’s kind of a natural progression for her.”

Goodrum’s official job title is coordinator-hitting development initiatives. She played Division I softball at the University of Oregon before getting a master’s degree in exercise and sports science from the University of Utah.

Goodrum is a lifelong baseball fan who always knew she wanted to work in sports, but she wasn’t drawn specifically to player development until after she saw those officials at work after joining the Brewers as a sports science intern in April 2017. She said she began to think more about the ways in which hitting a softball and hitting a baseball are similar, starting with a sound mental approach while a hitter is alone in the batter’s box.

Goodrum said she has not yet reflected on the historic nature of her promotion because she has been too focused on the work.

“I was just like, ‘OK, let’s go. This is going to be awesome. I get to think about hitting,’” Goodrum said. “There were some people that were kind of like, ‘This is new and maybe groundbreaking in the space.’ I didn’t really think about it at first. It took me a little bit to process.

“When I really started to process it was when Kim Ng got hired. For me, personally, that hire really showed me somebody who I could finally, really, truly look up to. Someone who has made it to a pinnacle position in a Major League organization. It took me a moment to be, like, people could look at me like that. I think it motivated me more than anything to continue to want to make a positive impact in baseball and continue to push the needle forward in making the Brewers’ player development unique.”

“Great news for us, and great news for Sara!” McKinley wrote. “She is an elite technician of hitting, has great feel for people and is an awesome human being.”

The Brewers announced Goodrum’s promotion while setting their player development staff for 2021. Among the newcomers are former Brewers infielder Junior Spivey, hired as coordinator of baseball diversity initiatives, and former MLB outfielder Quinton McCracken, hired as a special assistant for baseball operations and player development. Both will be based in Phoenix.

“Our Black players face unique challenges throughout their journeys in professional baseball. Junior is intimately familiar with these challenges and provides a resource for our players as they navigate their baseball lives on and off the field. As the world gets back to normal, Junior will also take a leading role ensuring that our players at our affiliates are connecting with their local communities.”