The San Diego Padres recently announced details on the planned upgrades at Petco Park for 2016. The centerpiece of which will be the new two-level social space in right-center field inspired by San Diego’s beach lifestyle.

Locally-based Sun Diego Boardshops has expanded its existing relationship with the Padres to become the presenting partner of the space, which will be constructed in the location currently occupied by The Beachers seating area and The Beach play area. As part of the design, the children’s sand play area will be preserved and relocated to a space along K Street, further removed from the playing field and safe from balls in play. Construction is already underway. 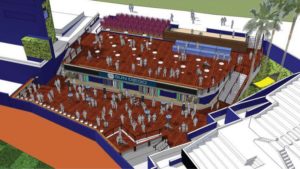 Sun Diego epitomizes what is unique and desirable about all of Southern California, and we are excited to expand our partnership with such an iconic local company that is emblematic of that lifestyle. This project will transform the space in right-center field, while preserving the view from the grass seating area in the Park at the Park. Together with Sun Diego, we will create an improved and unique experience for fans in what has previously been an underutilized area.

The new space, with a design aesthetic modeled after Southern California’s iconic piers, will feature pilings and decking constructed from environmentally friendly recycled composite wood. Drink rails will line the front row of each level, with approximately 60 fixed seats between the two. In total, the space will accommodate nearly 600 people in a standing room only capacity. Ideal for mingling and social interaction, it will be sold as a group space for the majority of games.