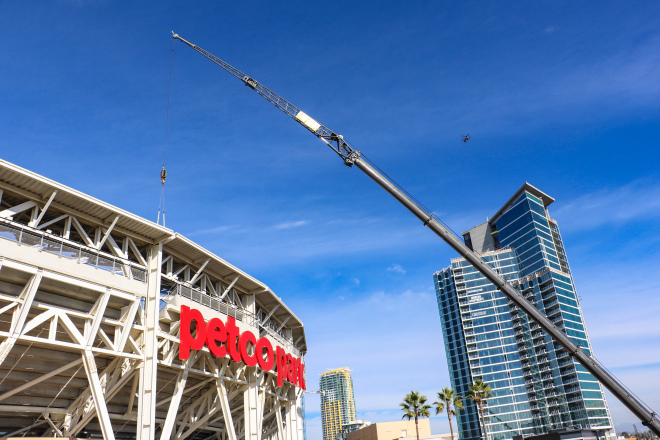 On-site solar at sports stadia and arenas has become a “thing” over the past decade across all sports. Starting with the Colorado Rockies and Coors Field in 2007, Major League Baseball has seen its share solar-topped roofs and solar canopied parking lots pop up. Most of the MLB installations have been on the smallish side. That changes with the late March opening of the largest solar installation in the big leagues at Petco Park, a partnership between the San Diego Padres and Sullivan Solar Power.

The San Diego Padres are poised to flip the switch this month on the largest solar installation in Major League Baseball at Petco Park. In fact, the 336,500 kW system will generate more electricity than all of the solar systems in MLB combined. It is thus fitting that the groundbreaking Petco Park solar system is being built and installed by Sullivan Solar Power, one of the most innovative and inspiring solar companies in Southern California if not the entire country.

The inspiring part of the Sullivan Solar Power story comes from the company’s namesake and founder, Daniel Sullivan.

A lifelong San Diegan, Sullivan was a 27 year-old electrician in 2004. Concerned about what he saw as a war-for-oil in Iraq, especially with the perspective that comes with being a new dad, and sensing an opportunity with a clean, domestic form of energy, Sullivan went to his boss and suggested the company get involved with solar. The boss said no at first and then, perhaps tired of his persistent employee’s repeated requests, finally relented — to a point — by saying, “if you want to build it yourself, go ahead. But we aren’t changing our focus to doing solar.”

Sullivan said something to the effect of “to heck with that” and founded his own company, Sullivan Solar Power.

So Sullivan started by living and working out of the garage of one of his first customers. Fast-forward a couple of years and things had improved somewhat: Sullivan Solar Power had four employees had leased office space. And Sullivan was no longer living at the garage. Instead, he was living at the office — hiding that fact from his colleagues — and showering at the gym.

But, the company’s mission — to fundamentally change the way we make electricity — along with its commitment to quality work, its educate-the-customer-about-solar ethos, its robust lineup of community service engagements, and its use of American-made panels began to resonate in Greater San Diego. So, too did Sullivan’s money back guarantee to customers. According to Tara Kelly, Sullivan Solar Power’s director of community development, “When Daniel started this company 14 years ago, there were less than 100 solar power systems on our local grid and it was much more expensive to go solar. Daniel, an electrician by trade, was so confident that his systems would pay off for customers; he offered to pay them if the panels didn’t produce as promised. The result? About 50 percent of our customers come from referrals.”