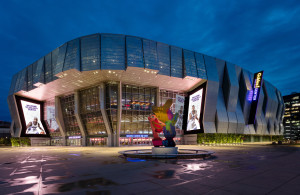 Yesterday, CNBC recognized the Sacramento Kings efforts to redefine the sports and entertainment experience through technology. The team’s new home, Golden 1 Center, is redefining how franchises and venues around the world think about the guest experience and embracing emerging technology.

The feature is just the latest recognition of the Sacramento Kings industry-leading technology and sustainability efforts. Just last week, the Green Sports Alliance honored the Kings as one of 12 “Environmental Innovators of the Year” for their sustainability efforts and in May, Golden 1 Center was named “Sports Facility of the Year” by Sports Business Journal. Additionally, the team’s groundbreaking new mobile app earned an Appy Award last month, was featured in Fast Company as the “Most Innovative Company in Sports,” and tops the list of SportTechie’s “25 Most Tech Savvy Sports Teams.”

Since becoming the first basketball team to pioneer Twitter 10 years ago, the Kings have continued to experiment with technology that revolutionizes the way the team interacts with their fans and community. Most recently, Kings Owner and Chairman Vivek Ranadivé announced a new effort with the city to bring autonomous vehicles to Sacramento, including a challenge to transport 50 people to the team’s season opener without a driver. Golden 1 Center will also host sport and sustainability executives at the seventh annual Green Sports Alliance summit later this month.

Other innovations and honors include: