Roger Federer Is Tough to Beat. Global Warming Might Have Pulled an Upset.

Roger Federer Is Tough to Beat. Global Warming Might Have Pulled an Upset. 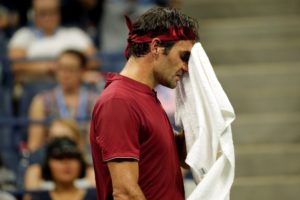 Roger Federer, one of the world’s greatest tennis players, may have become an unwitting spokesman for the effects of climate change on Monday at the U.S. Open.

Federer, who is ranked No. 2, seemed to struggle all night in the heat and humidity at Arthur Ashe Stadium, losing in a fourth-round upset to John Millman, an Australian ranked 55th.

“It was hot,” Federer said. It “was just one of those nights where I guess I felt I couldn’t get air; there was no circulation at all.”

This was the first time Federer, who won the U.S. Open five consecutive times from 2004 to 2008, lost to a player outside the top 50 at the tournament.

To some, the comments by Federer, 37, may sound like sour grapes. But they also underscore a growing problem: increasing nighttime temperatures.

Under climate change, overall temperatures are rising — 2018 is on track to be the fourth-warmest year on record — but the warming is not happening evenly. Summer nights have warmed at nearly twice the rate of summer days. Average overnight low temperatures in the United Stateshave increased 1.4 degrees Fahrenheit per century since 1895, according to the National Oceanic and Atmospheric Administration.

While daytime temperatures above 90 degrees Fahrenheit (32 degrees Celsius) have been a persistent problem at this U.S. Open, forcing officials to offer players heat breaks and suspend junior matches, conditions Monday night were not much cooler. Temperatures hovered in the mid-80s, with the humidity for much of the match above 70 percent.