Rob Manfred, MLB commit up to $150 million to alliance aiming to ‘increase Black representation throughout the sport’

Rob Manfred, MLB commit up to $150 million to alliance aiming to ‘increase Black representation throughout the sport’ 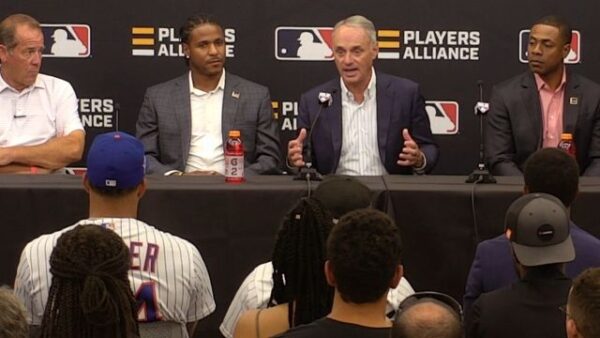 DENVER — Major League Baseball is committing up to $150 million to the Players Alliance, a nonprofit organization formed last year and composed of active and former major league players “aiming to build more equitable systems in baseball and increase Black representation throughout the sport,” according to a Monday news release.

Commissioner Rob Manfred revealed the partnership at a news conference at Coors Field, site of the All-Star Game.

Beginning in 2023, MLB will provide an annual $10 million, plus an additional $5 million in matching contributions from external Players Alliance fundraising. It represents the largest financial commitment in MLB history toward the goal of improving diversity in the sport on the field, in managerial coaching positions and in front-office leadership.

“Major League Baseball is thrilled to expand our commitment to the Players Alliance, which will include joint efforts to strengthen our sport’s engagement with Black communities,” Manfred said. “We believe in the mission of the Players Alliance and have been inspired by the passion and perspectives of the players who are leading this effort. We know that our sport is at its best when it is accessible to everyone. Together, we will make this a reality with innovative and collaborative programs.”

The money will go toward various programs, including those to support baseball in public and city schools as well as educational grants, scholarships and additional services to the Black community. Other programs that will benefit will be aimed at increasing Black youth participation in baseball as well as funding leagues, equipment, tournaments, clinics and other playground activities.

The Players Alliance consists of 143 current and former players and has donated over $41 million to Black communities with its mission to create an inclusive culture in the sport.