A recent Associated Press investigation revealed that Rio de Janeiro still has major efforts to undertake in order to ensure safe water quality for athletes that will be competing in Olympic and Paralympic swimming and boating events at next summer’s Olympic and Paralympic Games. The investigation, which involved four rounds of water tests from sites planned to host Olympic competition, has revealed high levels of bacterial and viral contaminants that have resulted in athlete illnesses during training sessions. 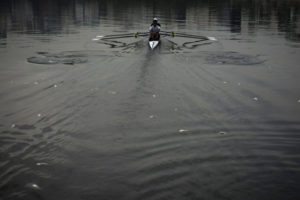 The water contamination is related to the lack of an integrated sewage system in the city of Rio de Janeiro. Several plans have been floated to deal with the issue from a health and safety standpoint. One suggestion has been a relocation of events into open water from Guanabara Bay. The Brazilian organizers introduced plans to improve city sewer infrastructure, though those projects have been largely overlooked in the struggle to prepare the Olympic sites on time.

In many ways the levels of pollution are dependent on weather patterns. During last summer’s test event, favorable southerly winds and zero precipitation allowed for eco-boats to largely clean up the visible trash in the waters of Guanabara Bay. Such conditions cannot be guaranteed, though the International Olympic Committee and international water sports federations have been working together to formulate contingency plans.

“If the bay is polluted and it becomes obvious that the racing will be unsafe and unfair, then we have to consider [moving one or more lanes outside Guanabara Bay]. We are dearly hoping that won’t happen,” said Scott Perry, an ISAF (international sailing federation) vice president and technical director. “This is a Plan B.”