By University of South Florida 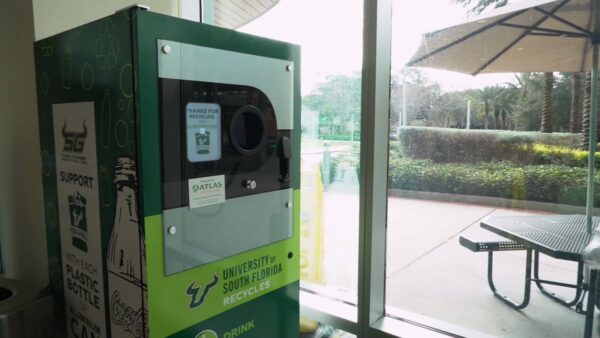 As students return from winter break, they’ll notice six new machines on USF’s campuses. They may resemble vending machines, but instead of money, they accept plastic bottles and aluminum cans.

The reverse vending machines (RVM) are funded by Coca-Cola as part of its “World Without Waste” environmental program, which includes an ambitious goal of collecting and recycling every bottle or can it sells by 2030.

To assist in these efforts, Coca-Cola has agreed to donate five cents per aluminum can or plastic bottle collected at USF to the Feed-A-Bull Food Pantry, up to $5,000 per year. Through a survey created by Student Government, students selected Feed-A Bull Food Pantry as their philanthropy of choice as it provides emergency food assistance and resources to students in need.

“I think this will provide a positive impact to combat food insecurity for our USF community,” Student Body Vice President Jillian Wilson said.

Even though the machines are managed by Coca-Cola, they will accept empty aluminum cans and plastic bottles from any brand. They’re not required to be cleaned, but the RVM will spit out anything that doesn’t meet recycling criteria, such as a glass bottle. The materials are crushed and sorted by type, collected by Coca-Cola’s subcontractor, Atlas, then treated and prepared for reuse. 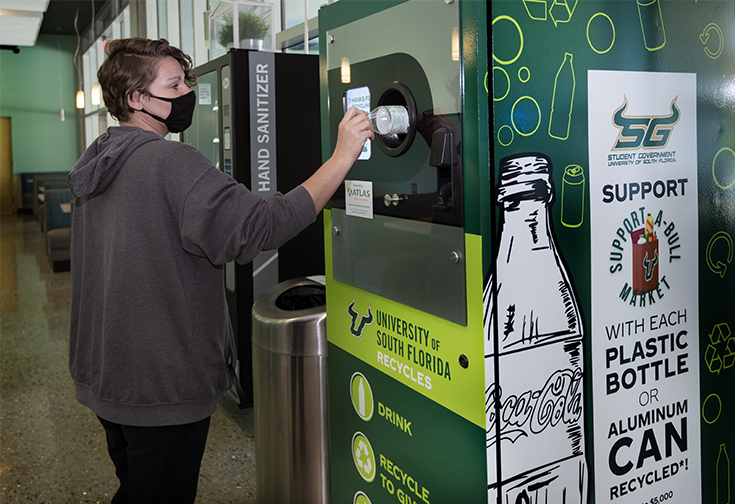 The maximum capacity for each machine is approximately 900 crushed containers. The performance of each RVM will be monitored monthly to make sure that collectively, they’re on track to reach the maximum donation amount for the pantry.

“We are very excited to launch the RVM project this spring semester and we hope students embrace this program and help support this great cause,” USF Auxiliary Services Director Nancy Santiago said.

For future semesters, the addition of card readers is being considered to run student competitions and further incentivize recycling on campus.

Strategically placed in high-demand or high-traffic areas, four machines were installed on the Tampa campus and two on the USF St. Petersburg campus. The Sarasota-Manatee campus will be considered for future expansion. The locations of the RVMs are: