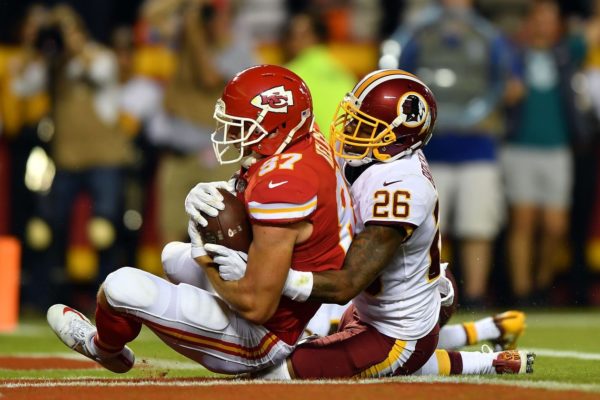 Increased criticism has fallen on Native American-themed names such as the Redskins and Chiefs.
PHOTO: PETER AIKEN/GETTY IMAGES

In the early 1970s, Stanford’s athletic teams were a source of great pride. They were also the target of simmering outrage.

Stanford won two consecutive Rose Bowls at the precise moment when Native American-themed mascots were being increasingly skewered as a cultural wrong. Around the time Jim Plunkett led the school to an upset of undefeated Ohio State in Pasadena in 1971, a group of the school’s Native American students launched a drive to dislodge the school’s nickname: the Indians.

Now the rest of the sports world has arrived at the same crossroads. The reasoning: Native American-themed names, traditions, logos and mascots—deemed inappropriate by one of the country’s top universities almost a half-century ago—have persisted into this moment of national social unrest over systemic racism.

That movement is forcing teams to finally address momentum that has built up—but often been ignored at the highest levels of American sports.

On Friday, after calls for change from fans, politicians and even their own business partners, the NFL’s Washington Redskins said they were conducting a review of their long-criticized name. The franchise will likely change its name before the start of 2020 season, two people familiar with the matter said.

A few hours later, MLB’s Cleveland Indians also said they were considering a name change, a year after retiring Chief Wahoo, a logo that had long been seen as a racist caricature.

The upheaval comes against a backdrop that’s both new and old. Sports leagues, and teams, have been thrust into the spotlight in recent weeks for their social and cultural messaging in the wake of George Floyd’s killing and protests across the country against issues of racism. At the same time, team names and traditions relating to Native Americans have been criticized as dehumanizing for decades.

Yet the response to those calls has never led to uniform change, leaving high schools in small towns and professional teams worth billions of dollars to make their own decisions about various monikers and imagery.

Redskins, for example, is commonly defined as a racial slur. It’s less clear where that leaves teams such as the Kansas City Chiefs, Atlanta Braves and others that officially or unofficially feature Native-themed traditions that many consider to be cultural appropriation or racially insensitive.

The National Congress of American Indians, a 75-year-old organization that represents Native American and tribal rights, has long called for the elimination of all “derogatory” mascots.

“Indian mascots and stereotypes present a misleading image of Indian people and feed the historic myths that have been used to whitewash a history of oppression,” the organization’s website says. “Despite decades of work to eliminate the use of discrimination and derogatory images in American sports, the practice has not gone away.”

Instead of going away en masse, the last 50 years or so has produced an inconsistent drip of change when it comes to these names. Some teams and schools evolved their thinking on this subject so long ago that their modern incarnations are hardly associated with it anymore.

The Golden State Warriors, previously the San Francisco and Philadelphia Warriors, once had a logo featuring a racist stereotype of a Native American. Two years after Stanford dropped the Indians, Dartmouth did the same. Syracuse’s mascot is now Otto the Orange because in 1978 the school got rid of the Saltine Warrior, a stereotypical Native American character.

That trickle continued with some teams slowly getting rid of mascots, logos and long standing traditions. But the most steadfast holdouts also happened to be the most prominent ones: professional franchises.

Washington owner Dan Snyder, in the past, had vowed to never change the derogatory name of his NFL team. Its defenders said the name honored Native Americans, despite critics who argued it did the exact opposite, and dictionary entries that defined it as a slur. In 2013, NFL commissioner Roger Goodell called the nickname a “unifying force,” and he continued to defend it until recently.

But since Floyd’s killing, and subsequent criticism from players to take a stronger stand on these issues, the NFL has delivered an energized message against social injustices. That also raised scrutiny over Washington’s name.
The mounting pressure reached an apex when two prominent sponsors sent clear messages in rapid succession. On Thursday, FedEx Corp.—the namesake of Washington’s stadium and run by Fred Smith, a minority owner in the franchise—said it asked the team to change its name. Shortly afterward, Nike Inc., the NFL’s official apparel partner, removed Washington gear from its website.

The next day, Washington announced it was reviewing its name as other major sponsors, such as Bank of America and PepsiCo, expressed similar views. That night, the Indians announced their own review.

“This process allows the team to take into account not only the proud tradition and history of the franchise but also input from our alumni, the organization, sponsors, the National Football League and the local community it is proud to represent on and off the field,” Snyder said in a statement Friday.

But the revelation that these teams are taking a hard look at their histories also doesn’t mean this category of nicknames will disappear immediately.

The Atlanta Braves, in a statement, said the organization “honors, supports and values the Native American community. That will never change.” The statement gave no indication the team was considering a name change. A spokesman for the Super Bowl champion Kansas City Chiefs declined to comment on whether the team is reviewing anything in this area.

At issue for some of these organizations is not just their names and imagery but deeply embedded traditions. Fans of both the Braves and Chiefs, for example, regularly employ the “Tomahawk Chop,” a cheer where they pretend to chop the air along with a faux war chant that is widely seen as a cartoonish depiction of Native Americans.

Ryan Helsley, a pitcher for the St. Louis Cardinals and member of Cherokee nation, criticized the Braves’ tradition last postseason while the Chiefs’ version of it—often called the Arrowhead Chop—faced renewed attention during the team’s Super Bowl run.

Even beyond that, fans of teams like the Chiefs wear headdresses to games and engage in other rituals. Kansas City, for instance, begins its home games with the ceremonial banging of a drum. The team has previously touted its work with communities every November during Native American Heritage month.

The Florida State Seminoles have a longstanding relationship with the tribe of the same name, and their football games begin with one of the most notable uses of Native imagery. A mascot named Osceola, after the tribe’s famous 19th century leader, rides out to midfield on a horse and plants a burning spear into the ground.

NCAI says it “respects the right of individual tribal nations to work with universities and athletic programs to decide how to protect and celebrate their respective tribal heritage.”

Some fans and teams have vigorously defended their names and practices as cultural tributes to American Indians and part of their community’s histories. But recent trends have only furthered to push them out the door. A recent study found 67% of people who strongly identify as Native American were offended by the nickname.

A California law banned Redskins names at its schools in 2015. In 2019, Maine banned all Native American team names at public schools.

Find the original article from the Wall Street Journal here