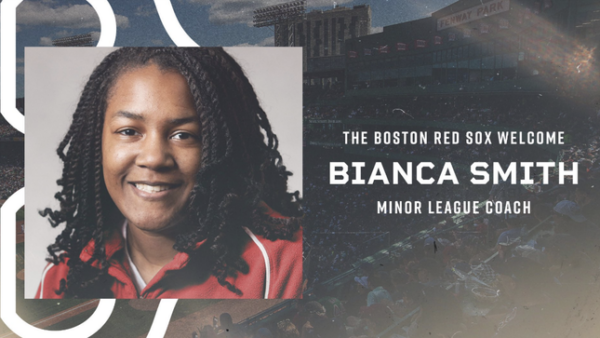 The Red Sox have hired Bianca Smith as a Minor League coach, making her the first Black woman to serve as a coach in the history of professional baseball.

A report first surfaced in The Boston Globe last week that the Red Sox were adding Smith to their organization, and the club officially welcomed her via a tweet on Monday: 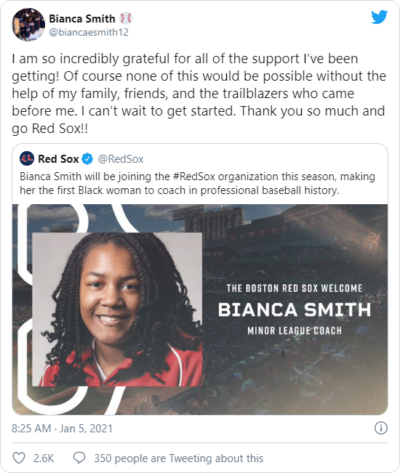 “The opportunity is amazing,” Smith said in an interview on MLB Network’s Hot Stove program on Monday. “I’m still wrapping my head around it. I probably won’t really have it sink in until I’m actually there.

“I think it’s a great opportunity also to kind of inspire other women who are interested in this game. This is not really something I thought about it when I was younger. I kind of fell into it being an athlete. So I’m excited to get that chance to show what I can do.”

Earlier this offseason, the Marlins named Kim Ng their new general manager, making her the first woman to hold that title in the four major sports in North America.

The 29-year-old Smith is currently the assistant coach and hitting coordinator at Carroll University in Wisconsin, a role she has held since 2018. Before that, Smith worked at Case Western Reserve University as director of baseball operations from 2013-17 and had a stint as assistant coach at University of Dallas in ’18.

She will start her Red Sox career based at the club’s player development facility in Fort Myers, Fla., and will work mainly with position players.

While Smith has a strong background in the biomechanical and analytic sides of baseball, she looks forward to getting the chance to broaden her expertise with the Red Sox.

“As the hitting coordinator, I run all of our technology side for hitting at Carroll,” said Smith. “The number of different resources that the Red Sox have as far as tech goes, I’m really excited to get my hands on that and learning the different metrics and being able to dive deeper into what I currently have is pretty exciting.”

Smith previously did internships in the baseball operations departments of the Texas Rangers and Cincinnati Reds.

The Red Sox are expected to make Smith available in a Zoom call with the media later this week.