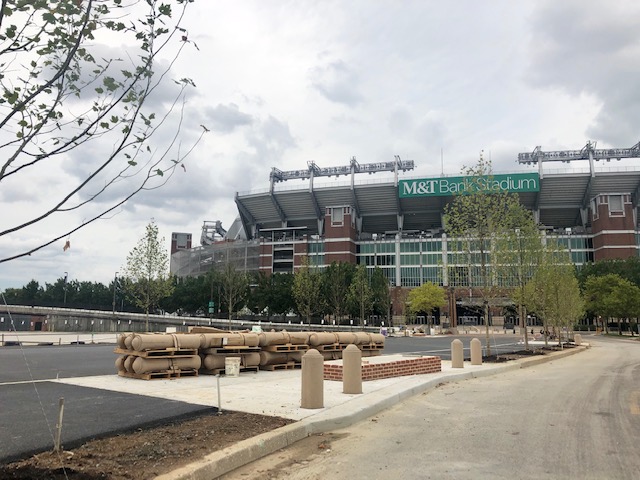 The Baltimore Ravens have completed a three-year, $120-million self-funded renovation of M&T Bank Stadium as the 2019 season gets ready to begin. The improvements include new 4K ultra-high definition video displays, new escalators and elevators to the upper deck, a new sound system, upgraded kitchen facilities, a redesigned club level, and new suites. The Ravens will show off the improvements on Saturday as the team hosts a training camp practice and a fireworks display and laser/light show starting at 6pm.

Phase 1 of stadium improvements, which was completed in the 2017 offseason, included two new 200 ft.-wide and 36 ft.-high 4K ultra-high definition video boards in the end zones, which replaced the existing boards, and the installation of the stadium’s second LED ribbon display above the club level.

Phase 2 began in the 2018 offseason. Improvements ready in time for the start of the 2018 season included a new sound system in the seating bowl; two new, two-level suites in the “corner notches” between the upper decks on the west side of the stadium; the Bud Light Touchdown Club field-level suite adjacent to the eastern end zone which replaced the bleachers that were used by Baltimore’s Marching Ravens; and four new 33 ft. by 44 ft., 1,600 sq. ft. 4K ultra-high definition video boards on top of the four new corner notch suites (only two of the suites were completed for the 2018 season). The Ravens now have more than 28,000 sq. ft. of display boards.

A new set of escalators was completed in the southeast corner of the stadium towards the end of the 2018 regular season.

Improvements completed for this season include new escalators and elevators in the northwest corner of M&T Bank Stadium that replace a former ramp to the upper deck, expanded kitchen facilities, and a renovated club level that includes new finishes and updates suites, redesigned concessions, a new sound system in the lounge, and additional video elements.

The final two two-level corner notch suites on the eastern side of the upper deck are also now ready. The Ravens now have 135 luxury suites. Ravens Executive Vice President of Public and Community Relations Kevin Byrne told SouthBMore.com all of the suites are sold for the season, except a few that the Ravens will sell for certain games as a “party suite.”

The plans were designed by Populous and the general contractor was Gilbane Building Company.

New screens were put on the corners of the north side of the stadium covering the new escalators and ramps. The screening is a metal mesh that has been etched with a Ravens wing design. The mesh serves a number of purposes, according to Byrne. He said it provides weather protection for the escalators on the northwest corner and also adds an architectural element to the exterior of the stadium. The mesh was manufactured and etched in Cambridge, Maryland at Cambridge Metal Products.

Through a project funded by the Maryland Stadium Authority, the stadium was also furnished with new LED Sports Lights this offseason. These lights provide more energy efficiency and the capability to instantly switch on and off. In all, Musco Sports Lighting installed 416 new light fixtures atop the stadium that produce a brighter light with less glare and the ability to create dynamic light shows.

“One of our primary goals is to create extraordinary experiences for fans every time they visit M&T Bank Stadium,” stated Ravens President Dick Cass in a press release. “We’re proud of the work that’s been done to ensure that we consistently produce one the NFL’s best gameday atmospheres.”

“The improvements we’ve made over the last several years keep our stadium on the cutting edge of technology, convenience, entertainment and design,” added Ravens Senior Vice President of Stadium Operations Roy Sommerhof in a press release. “We will always strive to provide fans a top-notch experience at Ravens home games.”

M&T Bank Stadium opened in 1998 and cost $220 million to build. Since then, the Ravens have spent approximately $220 million on overall enhancements. Other improvements included a $45-million investment from 2013 to 2015 to install Wi-Fi capabilities, advanced LED video displays, redesigned concession stands, and upgraded concourses.

Stadium Journey named M&T Bank Stadium the top NFL stadium experience in 2016and it was ranked number two in 2018. It was also named one of the 23 potential sites for the United 2026 FIFA World Cup.

Additional investments are underway at the Camden Yards Sports Complex. The pedestrian spine, also known as Ravens Walk, is undergoing an approximately $5.1-million renovation. Ravens Walk is a walkway that connects Oriole Park at Camden Yards to M&T Bank Stadium through the the stadium parking lots B and C. Ravens Walk is being renovated to include enhanced security features, new hardscaping, a new impervious surface, new landscaping, and storm water improvements. The Gilbane Building Company was awarded the contract, and renovations are expected to be completed by August of this year.

Construction is also underway on a new $7.2-million terminal at Camden Station at the Camden Yards Sports Complex. The station is a joint project of the Maryland Department of Transportation’s Mass Transit Administration, which operates the MARC train, and the MSA. Camden Station is the first stop on the MARC Camden Line. It is also an MTA Light Rail stop.

Stadium Area has become a hotbed for investment as within a couple blocks of the stadium is Caves Valley Partners’ $300-million-plus Stadium Square mixed-use development, which is partially completed; Horseshoe Casino Baltimore’s planned entertainment-focused, mixed-use development on Warner St. that will include Topgolf; the 48,000 sq. ft. Hammerjacks live music club which is under construction; and Himmelrich Associates’ Stadium Crossing development which is renovating four buildings near the corner of Ostend St. and Sharp St.