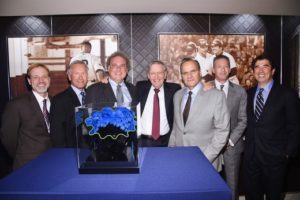 New York, NY – June 5, 2015 – Green Sports Alliance (GSA), an international non-profit whose mission focuses on sports greening as a tool to promote environmental education, honored the New York Yankees with its 2015 Environmental Leadership Award on June 4, 2015 at Yankee Stadium. Since moving to their new stadium in 2009, the New York Yankees have made a dedicated commitment to establishing impactful environmental practices including renewable energy, composting, water conservation, sustainable purchasing, and educating their fans about the importance of environmental stewardship.

In addition, there were a number of great Major League Baseball alumni on-site who signed autographs for guests including Dwight Gooden, Lee Mazzilli, Jeff Nelson and Mickey Rivers.

“It is vitally important that we help promote sustainability and reduce our impact on the environment. We have implemented many green initiatives at Yankee Stadium and continue to look for new and better ways to conserve natural resources, educate our guests and Yankees Team Members and support and partner with programs that promote sustainability,” said Doug Behar, Yankees Vice President of Stadium Operations. “We are humbled to receive this award from the Green Sports Alliance and will continue to work hard to further our efforts in sustainability.”

“Year after year the Yankees have quietly implemented some of the most progressive environmental initiatives in all of sports. In doing so, they have been using their enormous market influence and cultural visibility to help address critical ecological issues at one of the world’s most prominent and revered stages,” said Dr. Allen Hershkowitz, President of the Green Sports Alliance.

Various measures have been taken by the New York Yankees to promote a sustainable environment at Yankee Stadium. Through composting and recycling, approximately 85 percent of the stadium’s total trash is diverted away from landfills; each year, Yankee Stadium’s plumbing fixtures save about 3.1 million gallons of water while reducing the stadium’s water consumption by 22 percent; the Yankees (with the help of Hess Energy) have used renewable energy certificates (RECs) to meet 100% of the stadium’s purchased energy needs; and much more.

Since launching nationally in March of 2011, GSA has grown from just a few teams and venues to hundreds including the New York Yankees, the Boston Red Sox, The LA Dodgers, The New York Giants, Penn State Nittany Lions, San Francisco Giants, WM Phoenix Open and the Indianapolis Motor Speedway. GSA currently represents nearly 300 teams, venues, events and universities from 20 different leagues and 14 countries. With various program initiatives ranging from energy efficiency to species preservation to healthy food to waste management and more, GSA advises more leagues, teams and venues than any organization in the world about the benefits of environmental stewardship. In doing so, the GSA is leading the sports greening movement and inspiring millions of fans worldwide.

About the Green Sports Alliance

About the New York Yankees

Founded in 1903 and currently in their 113th season, the New York Yankees are the most successful and popular team in Major League Baseball history, having won 27 championships while appearing in 40 World Series. The club plays its home games at Yankee Stadium, which is one of New York City’s most-frequented tourist destinations and home to numerous non-baseball events, including college football’s New Era Pinstripe Bowl. As a result of their on-field accomplishments and iconic interlocking “NY” logo, the Yankees are among the most recognized brands in the world.