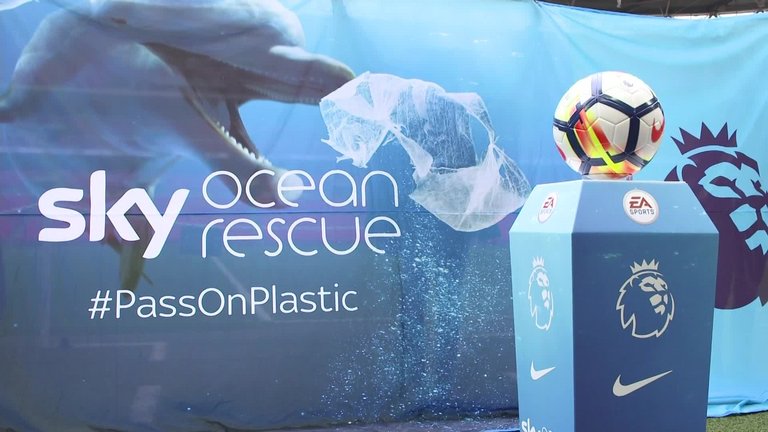 The Premier League insists its clubs are “committed” to reducing single-use plastics at stadiums – but environmental group Friends of the Earth is urging them to do more.

Alongside BASIS (the British Association for Sustainable Sport), the environmental group is calling on clubs to introduce a returnable cup scheme in their stadiums as part of a comprehensive set of measures.

FOTE estimates that around six million single-use plastic beer cups may have been used in the Premier League last season alone, while successful re-usable cup schemes have been operating in cricket and rugby venues.

A YouGov poll of UK football fans, commissioned by FOTE and published on Friday, found that 84% agree Premier League clubs should ensure reusable or returnable cups are used in their stadiums, while 86% agree stadiums should remove single-use plastics such as straws, sachets and cutlery where possible.

Friends of the Earth plastic campaigner Julian Kirby said: “Football clubs across the UK should aim to be champions off the pitch, as well as on it, by giving single-use plastic the boot.

“Fans want football clubs to take action on plastic. We’re encouraged that a number of clubs have already introduced measures on this issue – but we need every Premier and Football League club do what it can to get rid of unnecessary single-use plastic.

“This is why we are calling on clubs to adopt Friends of the Earth’s Plastic Pledge – and commit to a number of measures that leading stadiums have already introduced.

“A reusable cup scheme is one of the key steps clubs can take – this measure alone would prevent millions of single-use plastic cups being landfilled or incinerated every season. We hope every football club is up for the cup.”

A Premier League spokesperson said: “The Premier League and our clubs are committed to raising awareness around sustainability. Through our work with Sky Ocean Rescue, we are inspiring fans across the world to take positive action and reduce their single-use plastic intake, making small changes that will have a big impact.

“Our clubs are already working hard to implement change both internally, and externally with suppliers and contractors. A number of them have taken part in the reusable cup trial, are exploring the viability of their own reusable cup roll-out, or are looking at alternatives to plastic cups and other non-essential plastics. They are approaching sustainability in different ways but are acting to reduce single-use plastics in various areas of their business.

“They are also working hard in their communities, driving environmental awareness through education and social action projects such as the Plastic Pollution Challenge, run in partnership with Sky Ocean Rescue last year, which tasked primary school pupils with creating a pledge on how they would reduce plastic waste in their schools and local areas.”