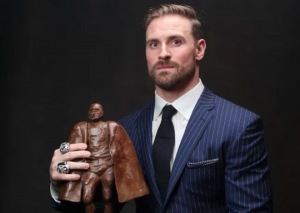 The New England Patriots knocked off the Los Angeles Rams 13-3 in a defensive struggle to win Super Bowl LIII at Atlanta’s LEED Platinum Mercedes-Benz Stadium, their sixth championship of the otherworldly 18 year Tom Brady-Bill Belichick era. The environment played a small but, it sez here, increasingly prominent role vs. recent Super Bowls. So before the pro football world turns its attention to free agency in March, April’s NFL Draft and the race to Super Bowl LIV in Miami¹ next February, here is a quick rundown of the Green-Sports happenings that surrounded yesterday’s Super Bowl LIII

While Eagles stalwart defensive end Chris Long did not win a third consecutive Super Bowl ring last night — he played important roles in Philadelphia’s championship in 2018 after winning one with the Patriots the year before — he did earn the prestigious Walter Payton NFL Man of the Year award. It honors a player’s volunteer and charity work, as well as his excellence on the field.

Long’s — and his Chris Long Foundation’s — main charitable initiative is Waterboys, a program that has united NFL players, professional athletes and sports fans to raise funds and awareness to provide clean drinking water to East African communities in need. By February 2018, Long’s goal of building 32 clean water wells, one for every NFL team, was met. Long has now set a goal of providing clean water to one million people.

“I am honored to be named the 2018 Walter Payton NFL Man of the Year and to join the long line of men who have received this prestigious honor,” Long said in a statement. “I am humbled by the support we have received from my peers who have donated to our various matching-campaigns, the commitment and perseverance displayed by the [military] veterans who have climbed Mt. Kilimanjaro with me each year, and the generosity of our fans who have made vital contributions to our foundation over the years.”