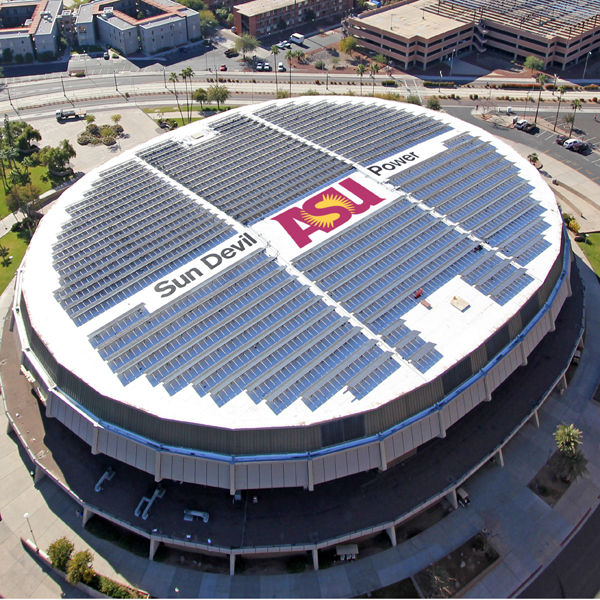 The 2017 NCAA Men’s Basketball Championships culminate with the popular Final Four in Glendale in early April, capping off an action-packed decade of major sporting events in the Valley that also included two Super Bowls, more than 20 college football bowl games, and two NCAA Men’s Basketball Regional Finals. During the past decade, these events have transformed from basic sports hosting opportunities in front of a national audience to international opportunities that showcase the latest and greatest in green sustainability practices within a metropolitan area and its facilities.

“We just completed our first meeting of the NCAA host city committee in August,” said Justin Zeulner, co-founder and executive director of the Green Sports Alliance, comprised of a network of more than 300 sports teams and venues from 20 different sports leagues and 14 countries.  “We started at six original founding members [and now we’re up] to almost 400 because sports has always played a role in social efforts, and now environmental affairs and stewardship is the newest cause,” he said. According to their website, the Green Sports Alliance inspires sports leagues, teams, venues, their partners and millions of fans to embrace renewable energy, healthy food, recycling, water efficiency, species preservation, safer chemicals and other environmentally preferable practices.

The cause in the Phoenix metropolitan area during March’s Final Four is to develop a blueprint in green efficiency and sustainability. This plan will be put to use in future Final Four events in San Antonio in 2018, Minneapolis in 2019, Atlanta in 2020 and Indianapolis in 2021.

“Phoenix is special because stakeholders want to interact more with community engagement campaigns using this amazing event as a backdrop,” said Zeulner. “Phoenix is unique with its culture, food and energy, so it gives us an opportunity to be creative in the philanthropic space with green activities.”