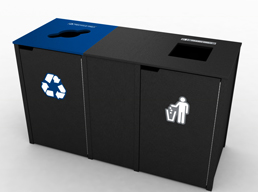 In the upcoming NBA season, 73 dual trash-and-recycling containers will be placed throughout the fieldhouse. (Image courtesy Pacers Sports & Entertainment)

The Pacers are ratcheting up a fledgling recycling effort in Bankers Life Fieldhouse and intend to begin enlisting fans to pitch in during the upcoming NBA season.

Later this year or early next year, team officials plan to place 73 dual trash-and-recycling containers throughout the fieldhouse to replace the vast majority of trash cans installed when the venue opened in 1999. The goal is to increase recycling and diminish the stream of waste coming out of the 18,165-seat venue.

The city’s Capital Improvement Board, the quasi-governmental entity that owns downtown’s major sports facilities, paid $175,738 to a Wisconsin-based firm for the bins. The team plans to have personnel—including workers from concession vendor Levy Restaurants—on hand to help educate fans about what can and cannot be recycled. Signage also will be posted to help fans navigate the new recycling program.

Pacers officials estimate the fieldhouse generated 730 tons of trash in 2015. Pacers Sports & Entertainment operates the venue for the CIB.

The recycling effort officially kicked off over the summer. During the Indiana Fever season, the fieldhouse cleaning crew began separating aluminum, plastic and glass from the refuse left on the floors in seating areas. In June, the team installed a bailer at the fieldhouse to begin recycling cardboard.

The effort is being pushed by team owner Herb Simon and his son Stephen, who recently has taken on a more active role in the franchise as part-owner.

“Herb and Stephen Simon are both very environmentally conscious and want to make sure we’re being good stewards,” said Mel Raines, Pacers senior vice president of facilities operations. “They’re very supportive of this effort and want to know how we are doing.”