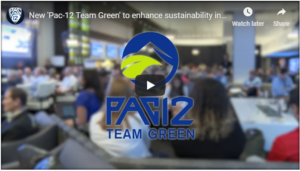 GreenSportsBlog believes that, for the Green-Sports movement to scale, it needs to go beyond engaging fans at stadia and arenas. That’s because most people don’t go to games. Rather, they consume sports on TV, on mobile devices, and more. To maximize its impact, Green-Sports messaging must be broadcast to those fans.

Unfortunately, that hasn’t happened much yet. Until the Pac-12 Networks began airing green-themed Public Service Announcements (PSAs) on their college football broadcasts this season.

Legendary Naismith Basketball Hall of Famer and broadcaster Bill Walton is famous for calling the Pac-12the “Conference of Champions!”

He’s right: Pac-12 members Stanford and UCLA rank first and second in most NCAA championships won across all sports — Walton added two to UCLA’s total during the early 1970s. Arizona State and USC have been at the top of the college baseball world, Oregon has dominated track and field (athletics) and Washington has among the best rowing programs in the nation. Arizona, Cal-Berkeley, Colorado, Oregon State, Utah and Washington State have had their moments in the sun, too.

The Pac-12 is also well on its way to being a Green-Sports champion: