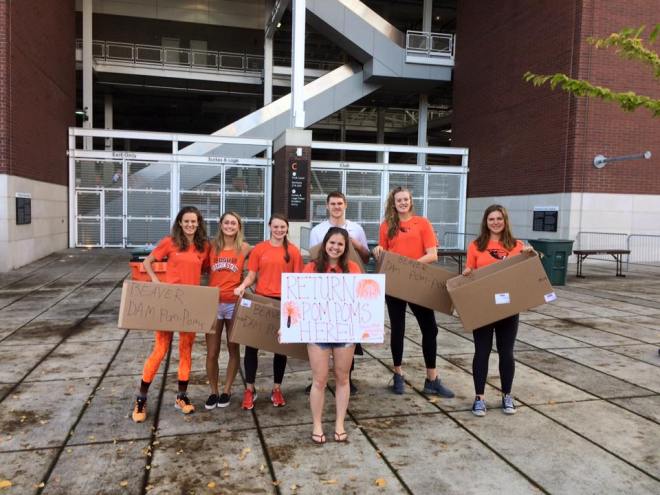 Cadres of green-minded students and the growing popularity of sustainability as an academic discipline are just two reasons why there is a growing intersection of Green & Sports on campuses across the country. But while athletics and sustainability departments have driven the green-sports bus, student-athletes have taken a back seat to this point. At least, that is, until Oregon State University’s Samantha (“Sam”) Lewis, a cross-country/track runner, and Jesikah Cavanaugh, a swimmer, decided they, along with three other student-athletes wanted to accelerate the greening of OSU sports. GreenSportsBlog talked recently with Sam and Jesikah to get their takes on how they came to take on leading roles in the birth of the Beaver Athlete Sustainability Team (BAST), what it has accomplished so far and where they think it will go from here.

If you wanted to draw up two characters to be green-sports student athlete pioneers, you would have conjured Sam Lewis and Jesikah Cavanaugh. They helped create the Beaver Athlete Sustainability Team or BAST at Oregon State University in Corvallis.

Both are life-long environmentalists.

Sam, a runner who grew up in Boulder, CO, told GreenSportsBlog that “sustainability was embedded in my life from an early age. We composted, recycled, rode bikes and snowshoed.” Oregon State was a natural choice due to her “love of the outdoors and of running in the rain.” I get her first love but running in the rain? Not so much.

Jesikah’s lifelong appreciation of the environment was nurtured in Anchorage, AK, where, she reports, “everything is clean.” A swimmer by the age of four, Jess says she was inspired by her older, faster sister Meghan. Recruited by Division III schools in Colorado and Pittsburgh, PA, Jesikah applied to OSU almost as an afterthought: “My dad went to Oregon State and I didn’t want to go there. But I was interested in environmental engineering and I liked that their program was tied to chemical engineering rather than civil, as was the case at most schools. I ultimately want to work on water remediation—cleaning and restoration—so that link with chemical engineering was a key reason I ended up in Corvallis.”

Both overcame serious obstacles in their sports.

Sam, who ran the 6K in cross-country, “suffered lots of injuries,” including a stress fracture in her back during her sophomore year. “It was so frustrating. I was recruited to be a Division I runner at a Pac-12 school and I couldn’t even walk my dog,” shared Sam, “It took a couple of years to be able to compete again, but the work it took to come back was so worth it—it was the best feeling ever.” And the women’s cross-country and track team has faced its own challenges. “The sport was dropped at Oregon State in 1988, rebooted in 2004, so we have been playing catch up against some of the best teams in the country,” explained Sam. But, reflecting her grit, the cross-country squad was able to finish a respectable 12th in the powerful, 35-team West region last year, an improvement of seven places from 2015.

Jes was not offered a swimming scholarship. No problem. She walked on to the Oregon State swim team as a freshman, swimming the 100- and 200-meter butterfly. Her consistent performances (“I never missed a meet!”) earned her a scholarship by her junior year.

With passion for the environment and grit, all that was needed for Sam and Jes to enter the green-sports fray was a cause.