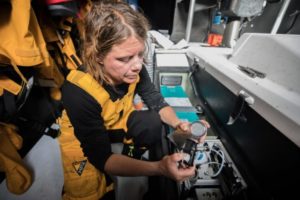 A sample is collected off the coast of Melbourne, Australia (Credit: Jeremie Lecaudey/Volvo Ocean Race)

The shocking level of plastic that resides in the ocean has been laid bare by a study carried out by Volvo Ocean Race, which found microplastic in almost every water sample it collected.

Indeed, of the 68 samples collected over the course of the race – from departing Alicante in October 2017, to its complete global circumnavigation to Cardiff in May 2018 – only two samples contained no microplastics, a sample collected off the south coast of Australia and one from the east coast of Argentina.

The most recent sample taken, off the US coast of Newport, Rhode Island, 75 particles of microplastics were found per cubic metre.

Even a sample collected close to the waters of uninhabited Antarctica found microplastics were as high as 25 particles per cubic metre.

Microplastic samples have been analysed by members of the Volvo Ocean Race’s scientific consortium in Germany. Those findings will now be presented at the Volvo Ocean Race Summit in The Hague, Netherlands, by Dr Toste Tanhua, of GEOMAR Institute for Ocean Research, today.