Oakland A’s to Give Plant-Based Burger its Stadium Debut

Oakland A’s to Give Plant-Based Burger its Stadium Debut 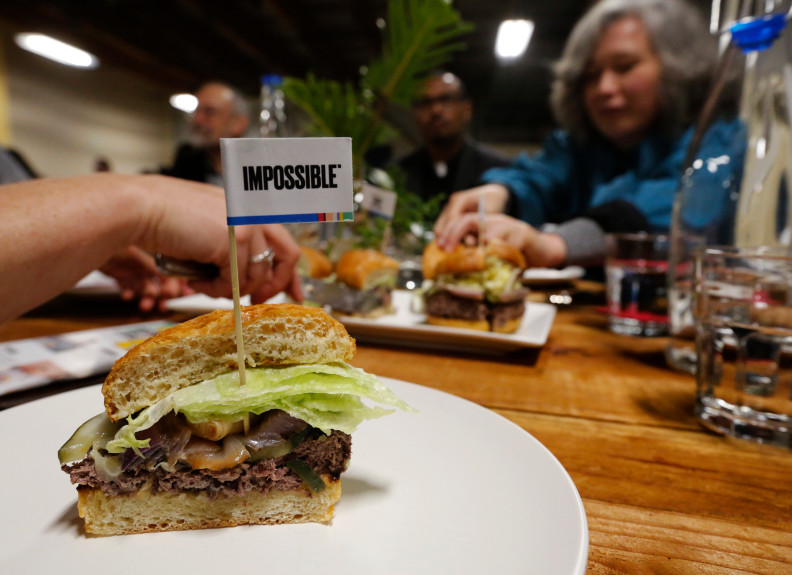 The “Impossible Burgers” are served after a panel discussion about the plant-based meat during an event announcing the new facility under construction for Impossible Foods in Oakland, Calif., on Wednesday, March 22, 2017. (Laura A. Oda/Bay Area News Group)

When the Oakland A’s take the field March 29 for their first home game of the 2018 season, another player will make a debut appearance at the Oakland Coliseum.

It’s the Impossible Burger, a vegan burger that tastes like meat. Spectra Food Services and Hospitality, which manages the Coliseum’s food operations, will become the first professional sports stadium in the nation to offer this Bay Area-born burger.

The Coliseum’s executive chef, Effie Spiegler, has created two versions for MLB fans. And look for an all-vegan option to join the menu.

His “Impossible Breakfast Burger,” with a sunny-side-up egg, applewood-smoked bacon, oil-cured tomatoes. bacon aioli and ghost-pepper cheese (watch out!) will be available at the Shibe Park Tavern.

“The quality and variety of food offerings at the ballpark is a key part to the fan experience,” said A’s President Dave Kaval said in a statement.  “We love the story behind the Impossible Burger. It is not only cutting edge and innovative in its approach to food production, but it is also the best plant-based burger currently on the market. We are thrilled to be the first team to offer it to our fans.”

Thanks to the power of Twitter, yet another Impossible Burger creation should be coming soon.

“This is great, @DaveKaval!” tweeted Ryan Thibodaux at @notmrtibbs. “But must both available menu items for this vegan burger have non-vegan ingredients (bacon, cheese, egg)? It’d be awesome for us vegan fans to have a great burger option without having ask to “hold the…” Still, very cool!”

Kaval was quick tor respond: “Yes. We can do that. Thanks for the suggestion.”