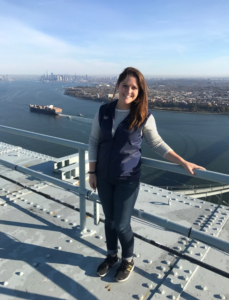 Caitlin Cunningham of the New York Road Runners stands atop the Staten Island side of the Verrazano Bridge, starting point for the TCS New York City Marathon (Photo credit: NYRR)

The TCS New York City Marathon is, arguably, the highest profile race of its kind on the planet. Managed by New York Road Runners (NYRR), it boasts the biggest field in the world with over 52,000 runners. Managing the event sustainably is a high priority for NYRR. GreenSportsBlog spoke with Caitlin Cunningham, the organization’s Senior Manager, Event Development and Logistics, to dig into the specifics of the greening effort surrounding the marathon.

If you live in Manhattan like I do, those two words connote the annual, joyous mid-autumn celebration of The Big Apple that is the TCS New York City Marathon.

She is responsible for managing sustainability for the Marathon. Not surprisingly, that is no easy task. After all, over 52,000 runners race past an estimated one million spectators across all five boroughs on the first Sunday in November, generating many tons of waste, along with carbon emissions associated with getting to and from the event.

“We’re aware of our impact on the city in terms of trash and other environmental issues,” acknowledged Cunningham. “So we have to be creative and work hard to minimize our footprint.”

Runners and spectators begin to see the fruits of the sustainability efforts of NYRR, its partner organizations and several city agencies on the Sunday before the big race.

The Poland Spring Marathon Kickoff five-miler features a partnership between NYRR and City Harvest, the nonprofit that helped launch the food rescue movement in 1982. Since then, it has collected and donated massive amounts of unused food from a myriad of events and other sources to charities throughout New York City. In 2018, 800 lbs. of food from the five-miler found its way to soup kitchens and more.

The night before the race, NYRR hosts a pasta dinner for more than 3,000 runners at the TCS New York City Marathon Pavilion, located in front of Tavern on the Green in Central Park. The organization has a Zero-Waste goal for the dinner, meaning it diverts 90 percent or more of its waste from landfill. With a 2018 diversion rate of 79 percent, the organization is closing on the Zero-Waste finish line.

Then, very early on race day, NYRR and the New York City Department of Transportation (DOT) spring into action with a comprehensive mass transit operation. Its objectives are to get more than 50,000 runners to the starting line smoothly and on time, while minimizing environmental impact.

“More than 90 percent of the runners take NYRR-provided transportation options, many of which are added for the marathon, from different points in the city, either directly to the start of the race on the Staten Island side of the Verrazano Bridge or to lower Manhattan’s Staten Island Ferry terminal,” Cunningham said. “About 23 thousand people take the ferry across New York Harbor to the staging area. The nearly ubiquitous use of mass transit is key to getting runners to the starting line on time and also to minimizing our carbon footprint.”