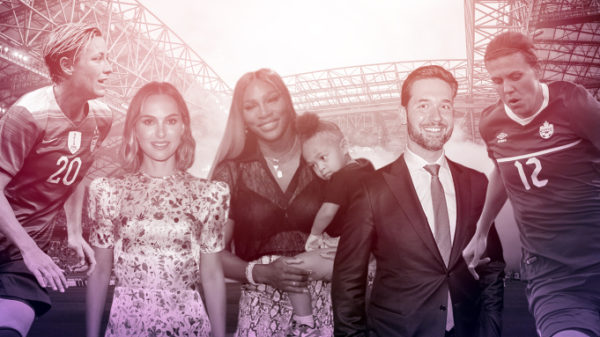 The NWSL is expanding to Los Angeles—and it’s doing so in a very L.A. way.

A loaded ownership group that features a slew of former U.S. women’s national team stars (including Mia Hamm, Abby Wambach, Julie Foudy and Lauren Holiday), celebrities (including founder Natalie Portman, Eva Longoria, Jessica Chastain, Jennifer Garner and Uzo Aduba) and industry leaders (including Kara Nortman, Julie Uhrman and Alexis Ohanian) and many more will steward the league’s 2022 expansion team in the city, which for now is going by the moniker Angel City.

The L.A. team will become the NWSL’s 11th after Racing Louisville FC joins in 2021.

“The growth trajectory of the NWSL is incredibly exciting, but we also need to be strategic and thoughtful about how fast we expand and the communities we partner with,” new NWSL commissioner Lisa Baird said in a statement. “We’ve long sought the right partner in L.A. considering the NWSL fanbase that already exists in the region and the massive interest in women’s soccer in general. Those factors, along with an incredible ownership group make this an ideal situation and we couldn’t be more thrilled to move forward.” 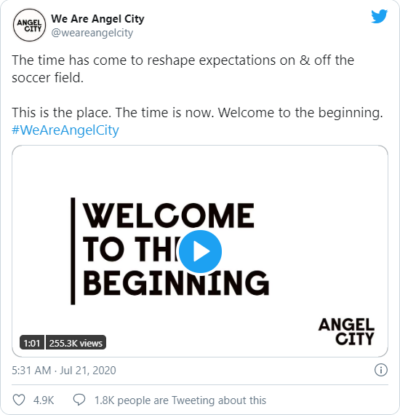 While Hamm is involved, there is no indication that MLS’s LAFC, which has its own star-laden ownership group of which she is a part, is backing this project. It’s unclear where the new team will play and whether perhaps LAFC’s Banc of California Stadium or the L.A. Galaxy’s Dignity Health Sports Park will be its home venue. According to the Los Angeles Times, Uhrman, a media and gaming entrepreneur, and the Galaxy have been in conversations regarding a role with the club.

Banc of California stadium was the site of an April 2019 friendly between the U.S. women’s national team and Belgium–one attended by Portman, Longoria, Chastain, Garner and Aduba. Their involvement with the game in the city, clearly, was not limited to that appearance. 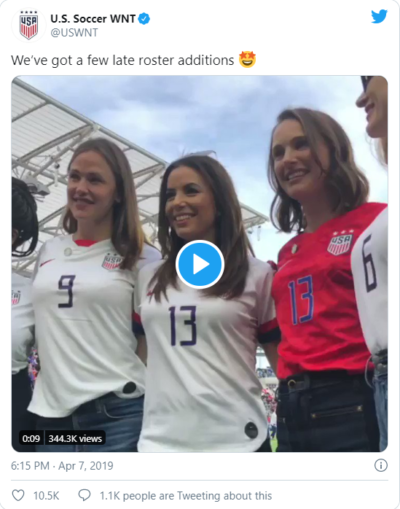 “Today we take an exciting step by announcing the first women majority-owned and led ownership group,” Portman said. “I am thrilled by the opportunity to partner with this incredible group of people to bring a professional women’s soccer team to Los Angeles. Together, we aim to build not only a winning team on the field, but also to develop a passionately loyal fan base. We also hope to make a substantive impact on our community, committing to extending access to sports for young people in Los Angeles through our relationship with the LA84 Foundation. Sports are such a joyful way to bring people together, and this has the power to make tangible change for female athletes both in our community and in the professional sphere.”

The ownership group also includes what has to be a first in sports: a 2-year-old. The daughter of tennis icon and club investor Serena Williams and lead founding investor and Reddit cofounder Ohanian, Alexis Olympia Ohanian Jr., is also listed in the ownership group that numbers more than 30 people.

“I am proud to be a part of this wonderful group working to bring a women’s professional football club to Los Angeles,” Ohanian said. “Chiefly, because I’m a fan of the game, but also because I believe there is massive potential for the sport and it’s been undervalued by too many people for far too long. As someone who spends hours kicking around a football with my 2-year-old daughter, I want her to have a front row seat to this revolution. I’m personally investing on behalf of my family because creating more opportunities in women’s sports is important to my wife and me, and we want to be a part of making a better future for our daughter.”

The club will mark the return of first-division professional women’s soccer to Los Angeles after the folding of the Los Angeles Sol. The club that featured Marta, Camille Abily, Aya Miyama and a host of other top players lasted one season in the old Women’s Professional Soccer league. Shannon Boxx, the Sol’s first player, is also involved in the Angel City project.

The NWSL is currently wrapping up its return-to-play tournament, with the semifinals of the Challenge Cup in Utah taking place on Wednesday. The Portland Thorns and Houston Dash will meet in one, while Sky Blue FC and the Chicago Red Stars will meet in the other, with the winners advancing to Sunday’s final at Rio Tinto Stadium.