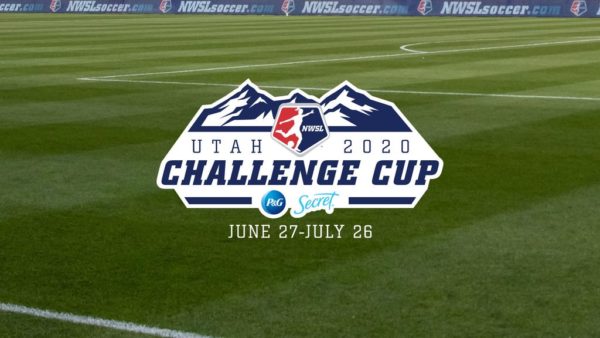 Tournament opener and championship game to air on CBS, CBS All Access to stream all 25 games live as League also announces multi-year partnership with Verizon

The National Women’s Soccer League announced today that the 2020 NWSL Challenge Cup presented by P&G and Secret will mark the return to action for all nine clubs. The 25-game tournament will kick off on June 27, 2020 at Zions Bank Stadium in Herriman, Utah. While spectators will not be in attendance, fans can catch all the action via CBS All Access with the opener and championship game also airing live on CBS.

This tournament marks the league’s first competition since the 2019 NWSL Championship which saw the North Carolina Courage defeat the Chicago Red Stars to become back-to-back NWSL Champions. In addition to the tournament’s presenting sponsors P&G and Secret, the league also announced today a new multi-year partnership with Verizon, another landmark in the continuing commercial success of the NWSL.

The format of the tournament will feature the league’s nine clubs each playing four games in the preliminary rounds to determine seeding. The top eight teams will advance to the quarterfinals, when the tournament becomes a knockout competition. The semifinals and Final presented by Budweiser will be played at Rio Tinto Stadium in Sandy, Utah, with the Championship match slated for July 26, 2020 where we will also announce the tournament MVP Award presented by Budweiser. Budweiser has been an Official Sponsor of the NWSL since 2019 and supporter of the U.S. women’s national team for over three decades.

Both the tournament opener and the Final will air on CBS and will be streamed on the CBS All Access subscription service. All other games will be live on CBS All Access in the U.S. and Canada and will re-air on CBS Sports Network. Fans outside the U.S. and Canada can stream the full tournament on Twitch.  A full tournament schedule, including game times and further broadcast details, will be provided in the days to come. Spectators will not be permitted in the venue.

“As our country begins to safely reopen and adjust to our collective new reality, and with the enthusiastic support of our players, owners, as well as our new and current commercial partners, the NWSL is thrilled to bring professional soccer back to the United States,” said NWSL Commissioner Lisa Baird. “This exciting month-long tournament will showcase our league’s talented players and provide our fans the type of world-class entertainment they’ve come to expect from the NWSL.”

Building on the momentum of a record-breaking 2019 and the growing success of women’s sports, on and off the field, the 2020 NWSL Challenge Cup is a unique opportunity for players to return to competition with the unanimous support of the league owners and the players association.

“The NWSLPA, working closely alongside NWSL, is excited to provide players the opportunity to return to sport, while also securing compensation and other necessities to make sure players’ concerns, feedback, and safety are at the forefront of all conversations,” said NWSLPA Executive Directors Yael Averbuch and Brooke Elby. “As the plans for the tournament unfolded, it was our priority as the NWSLPA to protect our players, and we feel that NWSL shares those values.”

“P&G is proud to support the world-class women athletes of the NWSL. In the face of the added challenges of competing in these unique times, we are delighted to help them bring this innovative tournament to life and bring greater visibility to these elite players and teams,” said Janet Fletcher, Director Sports Marketing, P&G. “As a longtime champion of gender equality, and an advocate for women’s equal pay in sports and beyond, our Secret deodorant brand team is committed to continuing our efforts to help women in sports advance without having to sweat the obstacles in their path.”

“Sports are such a huge part of our culture and give us a sense of connection – something we’re all craving right now,” said Marissa Weseloh, Director of Strategic Sponsorships, Verizon. “Partnering with the National Women’s Soccer League allows us to connect with the soccer community in a meaningful way as the sport continues to grow.”

This “international-style” tournament allows the league to safely return to the pitch and will be hosted by Dell Loy Hansen, owner of Utah Royals FC, who will accommodate all housing, training, and competition needs for the league’s nine teams and create an “NWSL Village” to control as much of the environment as possible.

“With the efforts of our frontline workers, our state’s early adoption of preventative measures, and our facilities at Zions Bank Real Academy, Rio Tinto Stadium, and America First Credit Union Field, Utah is uniquely prepared to host the nine teams in the NWSL and put on a tremendous tournament,” said Hansen. “With the full support of the Governor and the medical experts in our community, we are thrilled to bring the tournament to Utah.”

Under the leadership of Utah Governor Gary Herbert, the State of Utah and its citizens have drawn praise for their public health efforts, making Utah an ideal host for an event with the size and scope of the 2020 NWSL Challenge Cup presented by P&G and Secret. Commissioner Baird and Hansen have met with Governor Herbert, Lieutenant Governor Spencer Cox, the Utah Sports Commission, and local health officials, and all parties have enthusiastically endorsed the way forward.

“Utah is home to strong health care systems and dedicated medical professionals — and public health and safety are always a top priority for our communities. Because of those factors, I believe our state will be a great location for the National Women’s Soccer League to host its competition in 2020,” Governor Herbert said.  “I’m grateful to Dell Loy Hansen for his work to find a solution that we believe will benefit the league and our community as a whole.”

The NWSL’s Medical Task Force, comprised of a team doctor from each of the league’s nine teams, has worked tirelessly over the last nine weeks, in coordination with public health officials, to develop thorough and detailed medical and testing protocols to ensure the safest environment for a return to play and competition. Each player, official, and essential staff member will be tested 48 hours prior to departure for Utah and upon arrival and will be subject to consistent testing, temperature readings, and symptom review throughout their stay in Utah. The full protocols have also received unanimous support from the NWSL board of directors and the NWSLPA and can be found HERE.

Additional details will be available soon.