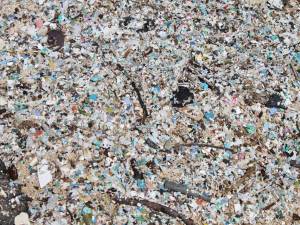 One meter by one meter surface sample at Kamilo Point on the Big Island, Hawaii. More than 84,000 pieces of micro-plastic were counted. (Photo credit: Nick Mallos)

The Ocean Conservancy is a 44-year old non-profit that creates science-based solutions for a healthy ocean and the wildlife and communities that depend on it. Plastic ocean waste, a serious, festering yet underreported environmental problem that affects the public and economic health of millions around the world, is one of the issues the organization is tackling. GreenSportsBlog spoke with Nick Mallos, the Ocean Conservancy’s Director of Trash Free Seas, about, among other things, how his team is working with the sailing world to publicize the Plastic Ocean Waste issue.

GreenSportsBlog: Director of Trash Free Seas. That is one cool job title. How did you get to the Ocean Conservancy and the “Trash Man” moniker?

Nick Mallos: I’ve been working on trash in the ocean for the better part of a decade, with the last six years at Ocean Conservancy so “Trash Man” seems to fit perfectly. Before that, while at Dickinson College (Carlisle, PA), where I earned a BS in Biology and Marine Science, I spent a semester in the Caribbean to study lemon sharks. While on the Island of South Caicos, I saw that massive amounts of trash and plastics were washing ashore on its north side. This got me interested in marine debris and what was needed to do to remove it. Later, in 2007-2008, I was a teaching assistant in marine science on the Outer Banks of North Carolina, right around the time when a significant number of people started to be aware of the Pacific Gyre [a massive “garbage patch” in the Northern Pacific Ocean]. The one issue that resonated with students of all ages, all backgrounds, was that trash shouldn’t be in the ocean. Plastic ocean waste is, sadly, a powerful tool to get diverse audiences to care about an environmental issue.