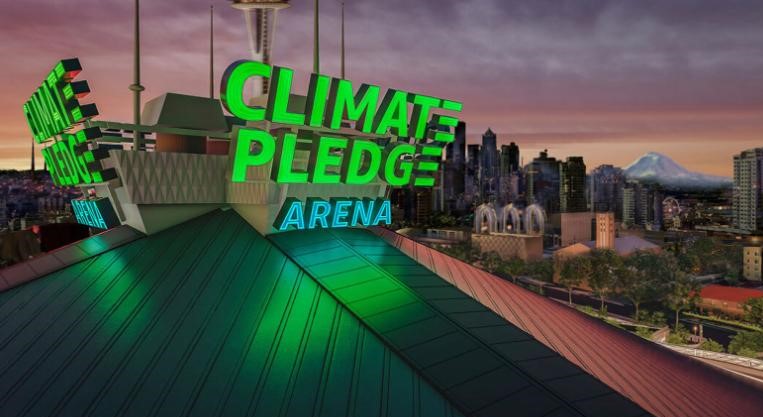 The NHL Seattle expansion team will play at Climate Pledge Arena when it enters the League for the 2021-22 season.

Amazon purchased the naming rights to the 18,100-seat building under construction at Seattle Center and formerly known as KeyArena. The name is modeled on The Climate Pledge, which was created by Amazon and Global Optimism in 2019 and calls on signatories to be net zero carbon across their businesses by 2040.

“I’m proud that we have a chance to really have an impact on a mission-critical issue,” NHL Seattle CEO Tod Leiweke said Thursday. “Most buildings get named. Very few have the privilege of naming it after something that you can truly impact our community but perhaps set an example for the rest of the world, and that’s our opportunity.”

Climate Pledge Arena will have all-electric operations and be fully powered by on-site solar panels and off-site renewable energy, at least 75 percent of the arena’s food program will be sourced locally, and all viable unused food from events will be donated to local community food programs. Additionally, the arena will use reclaimed rainwater in the ice system.

“The rainwater will be collected, we think, two ways: Some from the roof, but we’re also working on an idea potentially having the fans collect rainwater and bringing it and have ice made up of collections of the fans,” Leiweke said. “It’s a really beautiful concept and so symbolic of what we’re trying to do. But practically speaking, (naturual) gas has always been a part of buildings, and so to have the courage to say, ‘No, we can cook in our commissaries, we can dry our sweaters … This is possible.’ And the fact is, if we’re going to accept the climate pledge, if we’re going to accept the idea that we have a chance to leave our world in a better place than we found it for our kids, you’ve got to do things. You’ve got to not follow the same patterns. You’ve got to have courage in your conviction, and we do.”

Leiweke said part of the all-electric operations will include ice-resurfacing machines.

“Not only do they exist, when they see how good they work here … Because now, this is going to be something that people are going to want to follow and replicate. We’re living through one of the most difficult times, but people have optimism that there will be a cure at some point in time,” Leiweke said. “Global warming needs big ideas and inspirations, and I think today’s announcement is an incredible big idea that allows us to partner with this incredible company but also a guy named (Amazon CEO) Jeff Bezos, and every event and every game will have a special purpose about it, which is really super cool.”

Tickets to games for NHL Seattle and the Seattle Storm of the WNBA will double as free public transit passes to promote use of public transportation to and from games.

Leiweke wouldn’t divulge the lenght of the naming agreement, saying only, “It goes on for a good long while, and it follows typical protocols of what goes into a deal.

Seattle, which became the 32nd NHL team on Dec. 4, 2018, has not announced a nickname or unveiled colors and logos, but Leiweke said they are “making progress.”

“Some have speculated it’s a long time off. It’s not,” Leiweke said. “But you know, this is one of those issues where you want to measure twice and cut once, and that’s exactly what we’re doing. And we’d like to think when we do roll it out, people will say, ‘Hey, they got it.’ And so we’re working away on it, and that’s the next stop.”