From March 12-18, the NHL® and its Clubs will showcase their greening programs and initiatives that are reducing the League’s overall environmental impact, while calling on fans and partners to accelerate the movement toward a healthier planet. 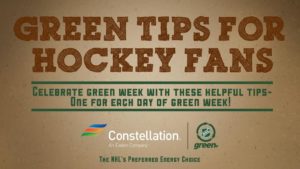 “The efforts we make today toward a more sustainable planet will impact not only our sport but future generations,” NHL Commissioner Gary Bettman said. “All of our Clubs support NHL Green environmental programs, and NHL Green Week is an important initiative to create even more attention for, and awareness of, this critical priority for the National Hockey League.”

All greenhouse gas emissions resulting from operations during NHL Green™ Week will be counterbalanced through investments in wind power and methane gas capture from landfills, based on the League’s partnership with Constellation, the NHL’s Preferred Energy Choice. This is part of the NHL’s broader effort to counterbalance its greenhouse gas footprint for the entire 2015-16 season with the purchase of 271 million kilowatt-hours (kWh) of Green-e Energy Certified RECs and Green-e Climate certified carbon offsets to match 126,500 metric tons of carbon dioxide-equivalent (CO2e).