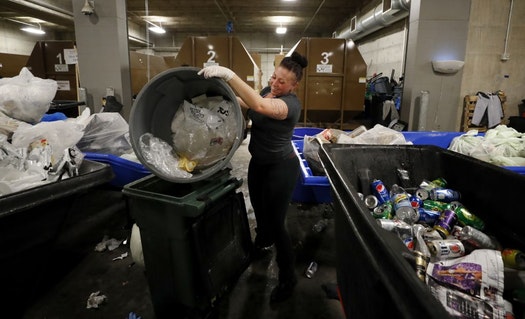 They have finally found a home for the purses.

Whether it was a Fendi shoulder sling or a Trader Joe’s tote, the thousands of bags that Vikings fans have relinquished at U.S. Bank Stadium security gates during the past two years wound up in a landfill or incinerator.

That’s one of the more novel solutions the stadium has adopted in its effort to dramatically increase the amount of gameday trash that is put to good use through recycling or composting.

“There are Coach purses — our women are ecstatic,” said Stephanie Silvers, executive director of Dress for Success, which provides financial education and job-hunting support for 1,000 women a year

It’s taken awhile to get to this point, stadium and NFL officials acknowledge. A year ago, the stadium was recycling 20 percent of the garbage that left the stadium after every game and event — up to 40 tons in total — mostly food waste and non-recyclable containers. And those purses.

Now “we are well down the path,” said Mike Vekich, chairman of the Minnesota Sports Facilities Authority.

But getting there took a lot of work.

In the last year, the food vendors have all switched to compostable containers. The stadium purchased some 375 clearly marked, $1,500 single and triple compartmented bins, which now stand like sentinels along the concourses and in all the suites. Then there are three massive compactors in the bowels of the building to compress each type of waste before it’s loaded into waiting trucks.

The stadium management firm, SMG, has hired a sustainability manager, arranged to donate all unopened food from the kitchens to food shelves, and contracted to deliver recyclables and organics to the Hennepin County Recycling and Transfer Station in Brooklyn Park and a composting facility in Rosemount.

And now, with Super Bowl LII just weeks away, U.S. Bank Stadium is ready for its oh-so-green debut.