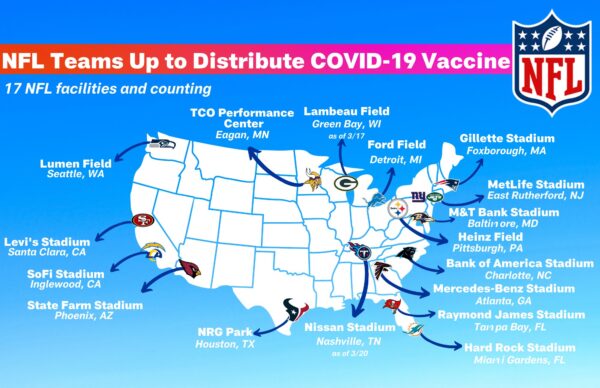 With 15 NFL stadiums and facilities across the country already being used to administer COVID-19 vaccines — and two more on the way — Friday marked the day in which 1 million vaccines have now been provided through league sites.

In a February letter to President Joe Biden, NFL Commissioner Roger Goodell issued a statement to the federal government that the league’s 30 stadiums would be made available as coronavirus vaccination sites.

So far, 15 are up and running with Green Bay’s Lambeau Field and Tennessee’s Nissan Stadium set to follow suit on Wednesday and Saturday, March 20, respectively.

Recently, Atlanta’s Mercedes-Benz Stadium, which has served as a vaccination site since January, expanded to become a high-volume site.

The Pro Football Hall of Fame also announced Friday that several of its members are joining with Centene Corporation to provide vaccine information and awareness in a series of public service announcements. The PSAs will air nationally and feature Hall of Famers Darrell Green, Aeneas Williams, Drew Pearson and, in both English and Spanish, Anthony Munoz. Lisa Salters, Dawn Staley and Iman McFarland will also be featured.

As the league stadiums have opened their gates in the hopes of combatting the ongoing COVID-19 pandemic, Friday serves as a statistical landmark in the progress that’s been made.