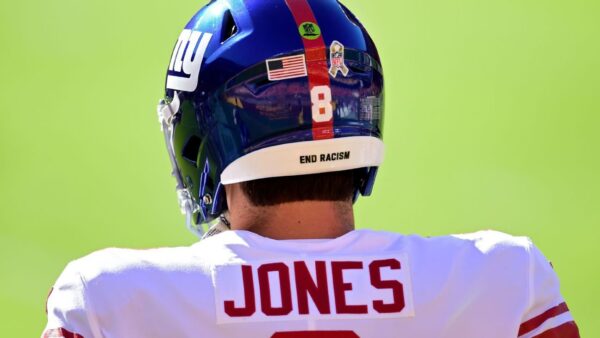 NFL players can wear social justice messages on their helmets again this season and “It Takes All of Us” and “End Racism” will be stenciled in end zones for the second straight year as part of the league’s Inspire Change platform.

The league will also bring back the “Say Their Stories” initiative and for the first time, each team will highlight its social justice work during a regular-season home game in Weeks 17 and 18.

“We are committed to Inspire Change and the social justice work that inspires change for the long term,” Anna Isaacson, NFL senior vice president of social responsibility, told The Associated Press.

The six messages players can choose from as part of the helmet decal program are: “End Racism,” “Stop Hate,” “It Takes All of Us,” “Black Lives Matter,” “Inspire Change” and “Say Their Stories.”

The end zone stencils will be placed on the field for all clubs in all home games, except when another cause is being recognized. For example, during a club’s Salute to Service game, “End Racism” will be replaced with “Salute To Service” in one end zone and “It Takes All of Us” will remain on the opposite side.

This year’s “Say Their Stories” features will again be voiced by NFL players but will evolve to include social justice heroes who have been personally identified by players for their impact in this area, particularly those from their local communities.

For the final two weeks of the regular season, all clubs will receive the relevant banners, goalpost wraps, stencils, helmet decals and video board graphics. The elements will continue to be featured during playoff games.

“That will provide a unified time frame for us to further amplify all of the work that our clubs are doing and that will lead into the playoffs where Inspire Change will continue to take center stage,” Isaacson said. “The key message for us as the season is starting, we are ramping up again in a big way with our social justice work.”

The league also worked with New Era and the Players Coalition to offer an Inspire Change knit hat that can be worn on the sideline during Weeks 17 and 18 by players, coaches and other personnel to add additional visibility to the cause. The hat will be sold at retail, and 100% of the league’s proceeds will be donated to Inspire Change grant recipients.