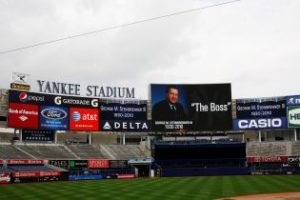 The New York Yankees baseball organization has aligned itself with the Paris Agreement by signing on to the UN Sports for Climate Action Framework.

According to the United Nations Framework Convention on Climate Change (UNFCCC) website, the pinstripes from New York became the first major North American sports team to sign on to the Framework that was launched by UN Climate Change and the sports sector at COP24 on Dec. 11, 2018 “to gather sports organizations, teams, athletes, and fans in a concerted effort to raise awareness and action to meet the goals of the Paris [Climate Change] Agreement.”

The goal of the Framework is to “drive emission reductions of sports operations and tap the popularity and passion of sport to engage millions of fans in the effort.”

March 21, 2019 marked the 25th anniversary of the UNFCC, and UN Climate Change Executive Secretary Patricia Espinosa had the following to say about the Yankees joining the cause:

“I applaud the New York Yankees, this legendary club with its legions of passionate fans, for taking this important step, signing on to the Sports for Climate Action Framework. We need leading organizations like the Yankees to stand up for ambitious action on climate change for the good of the planet and present and future generations.”