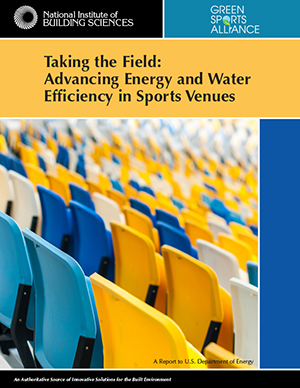 It might not seem like installing a low-flush toilet would have much impact on the daily water use of a family of four, but think what a difference it could make at one football stadium on Super Bowl Sunday. Consider the NRG Stadium in Houston, Texas, the location of this week’s game between the New England Patriots and the Atlanta Falcons. It has a seating capacity of 71,795, not including the thousands of vendors, security personnel and half-time participants, not to mention the teams themselves. Now, think about the impact that low-flush toilet could have.

A new report released today by the National Institute of Building Sciences and the Green Sports Alliance looks at ways the nation’s sports venues can make an impact by reducing their energy and water use. The report, Taking the Field: Advancing Energy and Water Efficiency in Sports Venues, considers the potential water and energy reductions the U.S. sports sector could make, and highlights the financial savings some leagues and teams are already seeing from putting such efficiency initiatives into place. The two organizations released the report during the 43rd Annual Stadium Managers Association Seminar, being held February 5 – 9, 2017, in Huntington Beach, California.

“Nothing captures the attention of Americans quite like sports,” said National Institute of Building Sciences President Henry L. Green, Hon. AIA. “When stadiums and arenas—some of the largest buildings in the nation—set high-performance building goals, it is something everyone can cheer for. We thank representatives from across the sports industry for contributing to this research, and look forward to seeing sports venues take steps to improve their energy and water efficiency.”

Over 240 million fans visit sports venues annually. Total square footage of these facilities easily reaches into the hundreds of millions. Sports teams and clubs employ nearly 60,000 people and generate $22.6 billion in annual revenue. The opportunity for these facility owners to improve energy and water performance of their venues, reduce operating costs and engage their communities is enormous.

“This report is a valuable resource for advancing energy and water performance across the sports industry and further making the business case for sustainability,” said Justin Zeulner, Green Sports Alliance executive director. “Our sports members will benefit from the continued sharing of innovative solutions that emphasize the importance of measuring and tracking energy and water use at sports venues. When we all PLAY GREENER, we all win.”