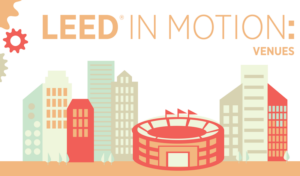 “The scope and scale of the venues industry is enormous, and the leaders creating these spaces have an important role to play in reducing environmental impact,” said Mahesh Ramanujam, President & CEO of USGBC. “By incorporating green practices, venues around the world are positively impacting their triple bottom line — people, planet, profit — while inspiring and educating others to be proactive in the areas of social responsibility and sustainability.”

Venues are large contributors to the U.S. economy. The U.S. Bureau of Labor Statistics reports that the number of conventions and events is expected to expand by 44% from 2010 to 2020 — outpacing the average projected growth of other industries. Annually, the top 200 stadiums in the U.S. alone draw roughly 181 million visitors, and roughly 60 million people worldwide attend a consumer or industry trade show. Waste Management estimates that the NFL, MLB, NBA, and NHL generate a combined 35,000 metric tons of CO2 each year from their fans’ waste. The convention and trade show industry, one of the largest global contributors to waste, produces an estimated 60,000 tons of garbage each year.