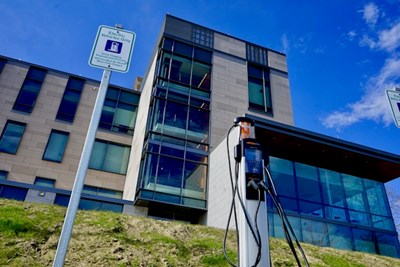 The university has doubled its number of electric vehicle charging stations on campus this year, including this one behind the renovated Coburn Hall.

From doubling the number of electric vehicle charging stations on campus to increasing incentives for energy-efficient infrastructure projects, the university is working with its utility provider, National Grid, on new and innovative ways to advance its sustainability and cost-saving goals.

In February, the university and National Grid entered into a strategic energy management partnership, a three-year agreement that earmarks more than $500,000 in incentives for campus projects that help save electricity and natural gas.

And thanks to an additional $95,000 in grant funding and incentives from National Grid, the university recently installed six new dual-head electric vehicle (EV) charging stations in parking facilities across campus: one in the South Campus garage, one in North Campus garage, two in the Hall Street garage (across from River Hawk Village on East Campus) and two in the Tsongas Center’s Lot B.

Including the January addition of an EV charging station in the parking lot behind the renovated Coburn Hall, the university now has 14 dual-head stations in nine parking lots and garages across campus. The stations provide charging ports for up to 28 vehicles at any given time.

“By doubling the number of charging stations on campus over the past few months, we’ve made it even easier for students, faculty and staff to commute to campus in environmentally friendly electric vehicles,” says Director of Sustainability Ruairi O’Mahony.

The $95,000 in National Grid funding covers approximately 90 percent of the total cost for the purchase and installation of the six new charging stations. The university’s Office of Sustainability is covering the remaining 10 percent, O’Mahony says.

The new charging stations will help meet a growing demand on campus. In February, the stations were used 382 times — the highest month on record, according to data from the UCard, Access and Parking Services (UCAPS) Office.

“On our peak days, we were seeing about 25 charging sessions a day and 20 unique drivers,” says Jon Victorine, director of UCAPS and security technology. “With more than 90 percent of our charging ports being used on those peak days, the need for more stations was clear.”

Through its strategic energy management partnership (SEMP) with National Grid, meanwhile, the university can reduce its annual utility bill while improving operations and reducing maintenance costs. The agreement doubles the university’s existing incentives for projects that save electricity and natural gas over the next three years.

“The incentives are a big pull for us, but National Grid is also providing valuable administrative and engineering support,” says UML Energy Manager Dan Abrahamson, who joined the university last summer from the MBTA, where he developed a similar SEMP with the utility provider. Abrahamson compares the program to Mass Save, the utilities collaborative that provides rebates, incentives and energy assessments to Massachusetts residents and businesses.

Abrahamson, O’Mahony and UML Construction Manager Paul Queeney will work with representatives from National Grid to identify cost-effective projects that the university can implement to achieve two annual energy-saving goals: 400,000 kilowatt hours (kWh) of electricity and 25,000 therms of natural gas.

Each year, the university can earn more than $160,000 in incentives for meeting those goals. Over the course of the three-year program, incentives could surpass $500,000.

“By saying that we’re going to commit to these goals, National Grid is saying they’ll commit to helping us by making us a preferred partner,” says Abrahamson, who is also part of an executive team with Assoc. Vice Chancellor for Facilities Management and Planning Jean Robinson and Executive Director of Operations and Services T.J. McCarthy that will work with National Grid representatives to oversee the partnership.

The targeted projects can involve both upgraded systems and new construction.

One potential project is improving the efficiency of the campus’ nearly 800 steam traps, which are valves that capture the condensation from the university’s steam heating system. Abrahamason says over time the traps calcify and begin to release steam, but repairing them requires an expensive auditing process.

“There’s new sensor technology, which has never been deployed before, that can connect to the traps that would immediately let us know if they fail,” he says. “That way we can continually fix them and make sure they’re not losing energy, which is advantageous for National Grid as well.”

Last fall, the university proposed a pipe insulation project to National Grid that would decrease energy loss in 23 mechanical rooms across campus. If the university could complete the work on poorly insulated steam line piping, tanks and equipment by the end of 2019, National Grid agreed to subsidize the cost of the $300,000 project.

“It was a hustle, but we ended up insulating more than 20 buildings in over a month,” says Abrahamson, who notes that the university should see almost $150,000 in annual energy savings over the next decade.

There’s also a tech element to the project. Tags with QR codes were attached along the new pipe insulation, so if a maintenance worker needs to repair or replace a component, they can scan the code to let building operations staff know when and where the work was done.

“National Grid created a cloud platform for us so we can pinpoint our efforts on campus,” Abrahamson says. “Not only does it improve energy efficiency, but it also improves operations efficiency.”

For all these recent efforts, Abrahamson never thought he’d see the university save energy like it is at the moment: by temporarily closing because of the coronavirus pandemic.

In the first three weeks of the shutdown, he says the university has curtailed its electric load by 60 percent and its natural gas load by 32 percent.

“We’re going to be looking at some significant energy savings and cost avoidance in our utility budget, which is one silver lining,” he says.